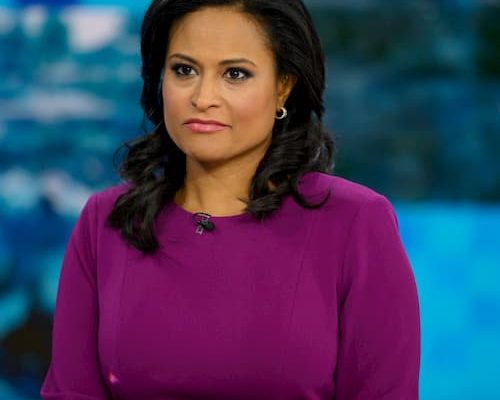 Kristen Welker is an American media personality serving as NBC News White House correspondent based in Washington, D.C. She also co-anchors the Weekend Today alongside Peter Alexander. She is set to moderate the third presidential debate on October 22, 2020.

She was born on July 1, 1976 in Philadelphia, Pennsylvania, United States.

Kristen is biracial; her mother is black while her father is white.

She holds a Bachelor of Arts from Harvard University, majoring in American History. She wrote for the Harvard Crimson, the school’s newspaper, while in college.

Kristen is the daughter of Harvey Welker and Julie Welker. Her mother, Julie is an award-winning real estate broker. She is president and CEO of Coldwell Banker Welker Real Estate. She holds a Bachelor of Arts degree from Penn State University and a Master’s degree in City Planning from the University of Pennsylvania.

Kristen is married to John Hughes since 2017. The couple got engaged in 2016, John proposed to her during the 2016 campaign trail. the couple met in October 204 after they were set up on a date by mutual friends.

John is a marketing director at Merck in Pittsburgh, Pennsylvania since February 2015. He has been with the company since 2006.

Welker joined NBC News in 2010 as a correspondent based at the NBC News West Coast Headquarters in Burbank, California. In December 2011 she became an NBC White House correspondent. She won a National Emmy Award for her role in NBC News’ coverage of Malaysia Airlines Flight 17.

Welker previously worked at WCAU-TV, NBC’s Philadelphia owned and operated station, where she anchored the NBC 10 weekend newscasts and started as a general assignment reporter in April 2005. She also previously worked at WLNE-TV in Providence, Rhode Island and KRCR-TV in Redding, California.

She regularly represents MSNBC at the daily White House press briefings as well as reports live for various programs on the channel. She occasionally fills in on NBC Nightly News and Today. In January 2020 she became a regular co-anchor of Weekend Today alongside Peter Alexander.  She previously worked for TODAY as an intern while in college.

Welker was named by the Commission on Presidential Debates on September 2, 2020 as the moderator of the third presidential election debate between Donald Trump and Joe Biden scheduled for October 22, 2020.   This makes her the first Black woman to moderate a presidential debate since 1992, when Carole Simpson led a town hall-style discussion among candidates George H.W. Bush, Bill Clinton, and Ross Perot.

This is not the first time she will serve as a moderator as she co-moderated the fifth Democratic presidential debate hosted by MSNBC and The Washington Post at Tyler Perry Studios in Atlanta in November 2019.

When Kristen was named co-anchor of Weekend Today President Trump congratulated her at a press conference saying, “They made a very wise decision.” However, when she was named the presidential debate moderator Trump seems to have changed his tune. He told the press that Kristen is a radical left Democrat.

Trump was referring to Kristen’s Twitter account which is still active although it had been temporarily deactivated earlier in the month after CSPAN host Steve Scully claimed his account was hacked before the scheduled, then cancelled, Oct. 15 presidential debate.

In 2019, she joined fellow journalists Andrea Mitchell, Rachel Maddow, and Ashley Parker for an all-female panel to moderate the presidential debate. The women received raved reviews and their coverage won them a Special or Variety – Breakthrough award at the 45th annual Gracie Awards.

She told Bill Hemmer Reports , “They set it up, didn’t they? They set it up exactly for Joe Biden. They are staging this for Biden. If you look through the topics, they’ve basically hand-selected [them] to set up Joe Biden for a win. It’s appalling what we’re seeing.”

She alleged that Trump had ensured foreign policy issues would not be part of the second and final debate when he helped negotiate peace deals between Israel and the United Arab Emirates earlier this year.

“He has a tremendous record, Joe Biden … [has] had the worst foreign policy decisions ever — those are the words of [former Defense Secretary] Bob Gates. So, it couldn’t possibly be the topic, and Kristen Welker certainly gave him some cover, didn’t she?”

She has not publicly announced her political affiliation.

Is Kristen Welker a Democrat or Republican

Kristen has not revealed whether she is a Democrat or Republican but President Trump claims that she is a ‘liberal left democrat’.