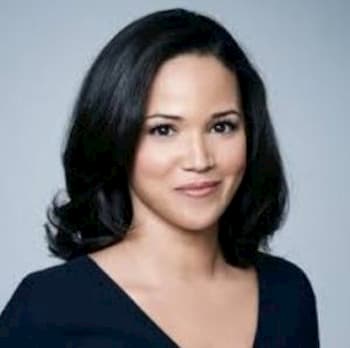 Laura Allison Jarrett is an American media personality working as an anchor for CNN. She  co-anchors  “Early Start” with Christine Romans and was previously a correspondent based in Washington, D.C. covering the Justice Department and legal issues.

Laura attended high school at the Chicago Laboratory Schools before  joining  Harvard Law School and graduated in  2010 with a degree in Juris Doctor.

Laura is the daughter of  Valerie Jarrett and William Jarrett. Her father was a physician and the son of Chicago Sun-Times reporter Vernon Jarrett while her mother is a businesswoman and former government official. She served as the senior advisor to U.S. President Barack Obama and assistant to the president for public engagement and intergovernmental affairs and also  served as a co-chair of the Obama–Biden Transition Project . However, her parents separated in the year 1987 and in 1993, William died of a cardiac attack.

She was the only child to her parents.

Laura is married to lawyer Tony Balkissoon who she met at Harvard Law School. Tony is the son of former politician Bas Balkissoon who served a Liberal member of the Legislative Assembly of Ontario. The duo  held their engagement ceremony at the Paris Club before officially exchanging their marriage vows in 2012 in Kenwood, Chicago with top government officials and politicians including the then-president Barack Obama and his wife Michelle attending.

Jarrett and her husband has a son James Anthony Balkissoon  born on July 16, 2019 weighing 7 pounds, 7 ounces .

Laura joined CNN in 2016 and  anchors “Early Start” alongside  Christine Romans. Previously, Jarrett was a correspondent based in Washington, D.C. covering the Justice Department and legal issues. Since joining CNN , Jarrett has covered many significant legal stories during the Trump administration, including the travel ban, migrant family separations at the southwest border, the firing of Attorney General Jeff Sessions and FBI Deputy Director Andrew McCabe, and high stakes battles between the Justice Department and Capitol Hill.

She had a lead role in delivering the breaking news of Special Counsel Robert Mueller’s appointment to oversee the Russia investigation in May 2017, as well as the conclusion of his work in March 2019. She also served as the lead reporter for CNN covering the Justice Department Inspector General’s report on the FBI’s investigation into Hillary Clinton’s handling of classified information, and the corruption trial of Senator Bob Menendez.

Prior to joining CNN, Jarrett worked as a litigation attorney in Chicago. In private practice, Jarrett focused on defending companies and individuals in government investigations brought by the Justice Department and Securities and Exchange Commission, as well as complex commercial litigation. Jarrett also devoted significant time to pro bono cases, including the representation of a sex trafficking victim who successfully used a new Illinois law to expunge her past convictions.

Prior to practicing law, Jarrett served as a judicial law clerk for the Honorable Rebecca Pallmeyer on the Northern District of Illinois and later for the Honorable Ann C. Williams on the Seventh Circuit Court of Appeals.
At Harvard Law School,  she was Articles Selection co-chair, an Article Editor, and a Technical Editor for the Harvard Journal of Law and Gender, and published her own articles on the intersection of gender, violence, and the law. Upon graduating in 2010, Jarrett was admitted to practice law in both state and federal court in Illinois.