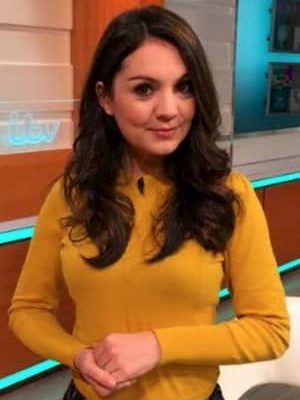 She stands at a height of 5 Feet 3 inches tall.

She attended Duston Upper School, gaining A-Levels in Mathematics, Physics and Art, and then obtained a degree in Physics and Meteorology at Reading University. Tobin also completed a World Meteorological Organization course on climate. In 2003, Laura joined the Met Office for further training.

Laura was born and raised in Northampton England, However , she hasn’t revealed any information about her parents.

She was brought up alongside her twin brother, Mark Tobin.

Tobin married to  Dean Brown . The two met at Reading University, started dating and afterwards Dean proposed to Laura in Charlottenburg in Germany. The two then exchanged their wedding vows on13th August 2010.Laura said its was her best day ever. Sharing photos from her big day on Instagram to celebrate her 10th wedding anniversary ,  Laura wrote: “A perfect excuse to share photos from that amazing day. I still love my big princess dress. It was Friday 13th (and yes it rained) unlucky for some but not for me.”

Laura and Tobin welcomed a daughter Charlotte Blossom in 2017 named after Charlottenburg a city where Dean proposed to Laura. She was born prematurely at 27 weeks and weighing 2lb 8oz. Laura revealed Charlotte spent the first 83 days of her life in hospital. In a Twitter post dated September 6, 2017, she revealed that her bundle of joy had arrived, “I’m proud to announce i’m a mummy-My beautiful baby arrived over the summer (much earlier than planned) a gorgeous girl called Charlotte.  “Little Charlotte came a bit earlier than planned and she is being very well looked after in hospital. Tobin revealed she was pregnant during her live weather report in May. She announced she would be having her own “little ray of sunshine” in October. In reference to a floral dress she was wearing at the time of the announcement, she said: “As we head into September things will be blooming but it won’t just be my dress, because I’m very pleased to let everybody know that, come the end of October, I’ll be having my own little ray of sunshine.

Tobin joined  ITV in 2012 and  presents the weather bulletins for the stations’s Breakfast programme Daybreak which was later replaced by Good Morning Britain in early 2014.Prior to joining ITV, Tobin previously worked for the  BBC and joined the Weather Centre forecasters at the end of 2007, regularly appearing on the BBC News channel, BBC World News, BBC Radio 5 Live, and the on-demand interactive services of BBC Red Button found on digital terrestrial and digital satellite TV. She also regularly presented the weather for the BBC News at One on the BBC.

On 3 September 2012 she joined the newly relaunched breakfast programme Daybreak as the weather presenter. On 18 July 2013, Tobin appeared on BBC Radio 1’s Innuendo Bingo. In April 2014, Daybreak was replaced by Good Morning Britain. Tobin continues to presents the weather updates on the programme.

She also worked  for the Met Office and also BBC Radio Wales before doing aeronautical meteorology reports at RAF Brize Norton and via the British Forces Broadcasting Service. She also worked at Cardiff weather centre, providing weather forecasts for the likes of energy companies and local radio, and she also had spells at RAF bases, including RAF Brize Norton.

Laura has an estimated net worth of $2 Million.