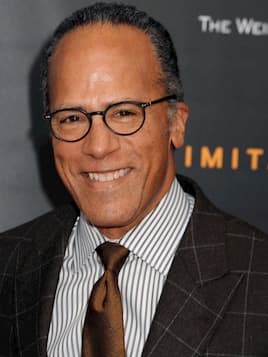 Lester Don Holt Jr.  is an American media personality working as an anchor of  the weekday edition  Nightly News and Dateline NBC. He was the  first African-American to solo anchor a weekday network nightly newscast. Lester previously worked for CBS as a reporter, anchor and international correspondent.

Holt attended  Cordova High School in Rancho Cordova in 1977 and later joined California State University, Sacramento, where he majored in government  though he never graduated.

Lester is the son of June DeRosario and Lester Don Holt Snr. His father was an Air Force master sergeant
while his mother was a regional planner.  His paternal grandparents were born, raised and married in Jamaica. His maternal grandfather Canute DeRozario was one of 14 children of an Indo-Jamaican father from Calcutta, India, and a White Jamaican mother from England.

Holt was brought up alongside his four brothers. However, not much is known about them apart from his half brother Mike Swanigan who worked at an Alaska radio station and is now a pilot

Here’s my big brother and I back in the day. These days he’s a pilot, and whenever I fly Alaska Airlines, people always ask if I’m Swani’s brother. It was fun to get on the other side of the interview and let him take the lead. You can watch here: https://t.co/UVl8MPqc1I pic.twitter.com/r67UHKNcUO

Lester is married to Carol Hagen Holt who is a licensed real estate salesperson, based in New York City.  According to her Corcoran Real Estate Firm profile, her goal is to “support her customers and make the entire process of buying and selling real estate an enjoyable and informative experience” . She previously  worked in the travel industry as a flight attendant. The couple met in 1980 and started dating. On their way to a date back then,  Holt was contacted by the radio station he was working with to report on an out-of-control forest fire in the Napa Valley. Instead of canceling the date, Holt turned the fire into the date. “I thought, ‘Wow, I’ve never been invited to go on a breaking news story before,’” Hagen-Holt told Sactown magazine. “‘A forest fire — that could be considered a hot date!’ So I said, ‘I’m game.’ I guess I knew what I was getting myself into with Lester and his career.”  The duo later exchanged their marriage vows  in 1982,

Holt and his wife has two sons together Stefan and Cameron. Stefan is a journalist who  graduated from California’s Pepperdine University in 2009. He served as a correspondent for the college news network Palestra.net and later became a weekend anchor and reporter for ABC affiliate WPBF/25 in West Palm Beach, Florida and  in 2011 he joined WMAQ as a reporter, later becoming a morning-news anchor. Stefan is married to  Morgan and have two sons together, Samuel and Henry.

In August 2020, Stefan announced that he was leaving New York and returning to NBC station WMAQ/5 in his native Chicago. “Some breaking life news: I’m coming home again!” wrote Stefan Holt on Instagram . “After several amazing years at @nbcnewyork,” which he joined in 2016 after five years at WMAQ, “my wife and I have decided to return to our roots — and we couldn’t be more excited to bring our family back home to Chicago. It is the city where I grew up. It is the city where we want to raise our two boys. I will be staying in the NBC family and I can’t wait to reconnect with all of my friends at @nbcchicago in a few weeks.”

Cameron on the other hand  is a financial analyst who holds two degrees from Stanford University and works for Morgan Stanley as an equity derivative trader.

Holt joined MSNBC in 2000. In 2003, he assumed full-time duties at NBC News, where he became a substitute anchor for NBC Nightly News and Today. He also  became a full-time co-anchor of Weekend Today following the death of previous co-anchor David Bloom. Until late 2005, he also anchored a two-hour daily newscast on MSNBC. On May 9, 2007, Holt was named anchor of the weekend edition of NBC Nightly News, anchoring the show for eight years before replacing Brian Williams as permanent anchor of the weekday edition.

Lester also hosts the  NBC’s show  Dateline. He moderated the presidential debates in 2016, and interviewed President Donald Trump in 2017, where fellow journalists said that he asked tough but appropriate questions. In 2010 he was photographed by the United States Air Force while reporting on an airdrop mission in Afghanistan
He  hosted a special for The History Channel about the 9/11 conspiracy theories, served as a sportsdesk reporter for NBC Sports coverage of the 2008 Summer Olympics and is the host of Dateline on ID, an edition of Dateline NBC shown on the Investigation Discovery network. In 2008, he narrated a documentary regarding actual crystal skulls on the Sci-Fi Channel.

Holt interviewing Dr. Holly Bamford of the National Ocean Service and National Oceanic and Atmospheric Administration in 2013. He also  moderated the Democratic presidential candidates’ debate in January 2016, alongside a panel of NBC political reporters as well as the first presidential debate on September 26, 2016. In May 2017, when Holt interviewed President Trump, they discussed Trump’s firing of FBI director James Comey.  Holt’s interview with Trump resulted in extensive media coverage.

Prior to joining NBC News, Holt also spent 19 years with CBS, as a reporter, anchor, and international correspondent. In 1981, he was hired as a reporter for WCBS-TV in New York City. In 1982, he became a reporter and weekend anchor on KNXT in Los Angeles, and the next year he returned to WCBS-TV as a reporter and weekend anchor. In 1986, Holt moved to WBBM-TV in Chicago, where he spent 14 years anchoring the evening news. Holt not only worked at the anchor desk but also reported extensively from troubled spots around the world including Iraq, Northern Ireland, Somalia, El Salvador and Haiti.

He earns an annual salary of $10 million.

He has an estimated net worth of 35million.