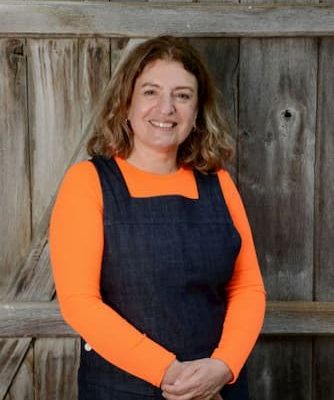 Lucia Scalisi is a senior painting conservator and a reality television personality known for her appearance in the BBC show, The Repair Shop. She served as a Senior Conservator of Paintings at the V&A for 11 years before opening a Conservation Studio in private practice in London.

She has not made her age public.

Lucia is a British national.

She is British and not Italian.

Scalisi’s marital status is unknown as she has not publically spoke about her personal life but some sites suggest she is married with children.

According to her website, she has a 2.1 Hons from Sheffield University; She has a Diploma in the Conservation of Easel Paintings from the University of Northumbria (formerly Gateshead Technical College); ICOM-Conservation (International Council of Museums) & BAPCR (British Assoc. of Paintings Conservators/Restorers).

She has also worked as a chief restorer with ‘Calcutta Tercentenary Trust’ at Victoria Memorial Hall, Kolkatta, India; Advisor to The Levantine Foundation/Deir al-Surian Desert Monastery, Egypt (image below). She also worked with the American University of Beirut (AUB) on their inaugural collection.

She has also worked as a lecturer having lectured at the Academy of Conservation in Tbilisi, Georgia and in Conservation Studies at London City & Guilds

One of the paintings she restored on The Repair Shop was in Christmas Special where she worked on a European-style picture from the colonial era of South America.

” It’s a well known and relevant Christmas subject ‘Virgin and Child’ painted ‘Statue‘ style, imitating statues commonly seen on the Church altar – it is not a realistic figure.

This particular painting is remarkable not only because it is in the statue style and tells much ‘news’ from the old world, but in the face of the Madonna we see the face of an indigenous Quechua woman.

When is a brunette not a brunette? This is as exciting as it gets on a regular work day & can hardly wait to get back into the studio. One of Sir Peter Lely’s (1618-1680) ‘Beauties’ arrived. I could see it was heavily ‘restored’ & fairly recently too (prob latter quarter 20thC). Heavy handed treatments having squashed raised impasto for example. I can also see it isn’t the first campaign this portrait has endured & my intention was to go lightly, probably do little other than remove surface accretions & apply a glorious new modern varnish to saturate the surface. Then, as I perused the surface & start to ‘read’ it more fully…. a tiny cleaning test lead into a larger cleaning area & then a blond curl appeared! then the turgid green fabric turned to a delicate pistachio coloured fabric & a flaming autumnal orange wrap appeared from beneath a thick muddy fog of someone else’s idea of what it should look like 😳 & & & – more to do, but the question is, how do we stop people from doing too much? Why do restorers think it’s alright to change the artists’ (in this case Sir Peter Lely no less) original intention, let alone the personality of the original sitter? Questions, debates, knowledge & appreciation #portraits #paintings #art #history #portraiture #restoration #ethics #experience #conservation #stories #The Secret Life of Paintings