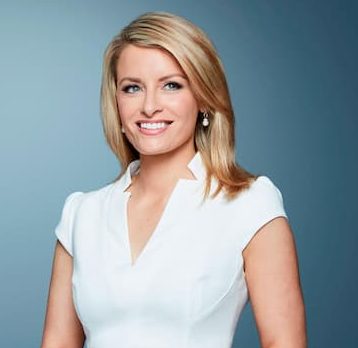 Lynda Kinkade is an Australian- American based journalist serving as an anchor for CNN International based in Atlanta. She anchors CNN Newsroom on Friday and Saturday at 10am, 11am and 1pm ET, and also features on Connect the World and Hala Gorani Tonight.

Lynda stands at a height of 5 feet 7 inches tall.

She has a Bachelor of Arts in Communication (Journalism) from the University of Technology, Sydney.

Lynda hasn’t revealed much about her parents. She however has two siblings; an older brother and her twin brother.

In 2013 she got married to Travis Jackson

For the most part we live in gym pants and tees. For the front porch project we benched the workout wear. Our amazing local photographer @katebyars donated her time to snap family pictures at front and backyards (at 6ft +) over the last few months and together we helped raise about $15,000 to buy groceries for Atlanta families doing it tough due to covid19 through @urbanrecipe Thank you Kate for sharing your talent and to all the families who donated!! Love my lockdown crew ❤️ This was at 20 weeks pregnant. #frontporchproject #katebyars #familyphotography #family #coronavirus

As of June 2020, Lynda is pregnant and expecting her third baby.

Pregnant in a pandemic. The hospital is eerily quiet. I was told only 50% of staff are in. Most are on rotation – two weeks in and two weeks at home (doing tele-medicine). Still no visitors or family allowed except under exceptional circumstances. Only patients deemed essential can enter. I was greeted by two people in full protective gear and had my temperature screened. I was checked to ensure i was an essential patient (my belly gave that away!). Hand sanitiser is everywhere. Hospital appointments have been scaled back. My next appointment will be via tele-medicine! This appointment went as well as can be expected – at 6ft distance from my ob-gyn and technician. . #pregnant #pregnantinapandemic #pregnantlife #coronavirus #pregnantselfie #babyscan #hashimotosdisease #thyroidhealth #hashimotospregnancy #immunecompromised

Kinkade began her career in journalism in 2002 as a political researcher for the Seven Network. She later worked on the New South Wales state election in 2003. After graduating college she worked as a reporter for NBN Television in various locations in New South Wales including Newscastle, Tweed Heads and Lismore.

In Dember 2004 she joined Nine Network as an Assistant Chief of Staff and later became a producer and reporter on Today, Nine Afternoon News, Nightline and Nine News Sydney. She resigned with Seven Network in December 2008 as a national correspondent.

In December 2013 she moved to New York City where she worked as a freelance foreign correspondent where she covered breaking news and filed reports for Seven News, Sunrise and Today Tonight. In 2014 she joined CNN.

In August 2014 she joined CNN Newsroom (CNNI) as an anchor for the weekend editions. She currently anchors for r CNN International based in Atlanta. She anchors CNN Newsroom on Friday and Saturday at 10am, 11am and 1pm ET. She also features on Connect the World and Hala Gorani Tonight.

Since joining CNN she has anchored on breaking news such as violent protests from Hong Kong to Chile, terror attacks in Europe, Africa and the Middle East, Hurricanes Florence, Harvey and Maria and the victory against ISIS in the Iraqi city of Mosul. She has also reported extensively on the Trump administration, Russian interference in the 2016 election and the ongoing impeachment inquiry.

In 2015 during the Paris terror attacks, she anchored CNN’s breaking news coverage across both CNN/U.S. and CNN International, contributing to the network’s 2016 Royal Television Society’s award for Best Breaking News Coverage.

In 2017 she wrote a compelling report on the opioid crisis in the U.S., which was one of the most clicked on stories on CNN Digital. She was also part of CNN’s breaking news coverage of the Manchester concert attack, which was nominated for an Emmy Award, and secured an exclusive interview with Muhammad Ali’s twin daughters after his death in 2016.

She has also been instrumental in CNN’s coverage around The CNN Freedom Project, the network’s initiative that highlights modern-day slavery, reporting live from schools raising awareness of human trafficking for #MyFreedomDay and from the U.S. State Department around its annual Trafficking in Persons Report.