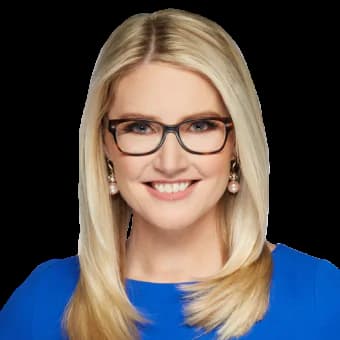 Marie Elizabeth Harf is an American media personality serving as a liberal political commentator for the Fox News Channel. She previously was the former deputy campaign manager for policy and communications for the Rep. Seth Moulton (D-Mass.) presidential campaign and also served as the Senior advisor of Strategic Communications to U.S. Secretary of State John Kerry at the United States Department of State and was  also  Acting Spokesperson and Deputy Spokesperson of the State Department.

Marie is a Christian, an  Anglican to be precise

Marie attended  Granville High School and graduated  in 1999 before joining  Indiana University Bloomington  and graduated with a BA in Political Science with concentrations in Jewish Studies and Russian and Eastern European Studies, and then received her master’s degree in Foreign Affairs from the University of Virginia,

She is the daughter of Jane Ax Harf of Granville, Ohio, and James E. Harf of St. Louis, Missouri. Her father is the associate vice president and the director of the Center for Global Education at Maryville University in St. Louis. He is also a professor emeritus of political science at Ohio State University in Columbus. Her mother is the director of the University Clean Energy Alliance of Ohio, a statewide organization in Columbus that supports clean energy research.

Marie is married to Joshua Paul Lucas the son of Tricia H. Lucas and John E. Lucas of Manchester, N.H. His  mother works in Concord, N.H., as the advocacy director for New Futures, a nonprofit organization that combats alcohol and drug abuse while his  father is a lawyer for the State of New Hampshire Office of Legislative Services in Concord.Paul earned a master’s degree in law and diplomacy at Tufts University and also graduated magna cum laude from Yale. The duo exchanged their marriage vows in April 14, 2012 at the Vienna Presbyterian Church in Vienna, Va with Rev. Erin E. Bair, an Anglican priest and a friend of the couple officiating  the ceremony.

Marie and her husband don’t have any children as of 2020.

Marie Harf is a contributor for FOX News Channel (FNC), providing political and national security analysis and insight across FNC and FOX Business Network’s (FBN) daytime and primetime programming. She joined the network in 2017.In May 2019, Harf left Fox News to work for Rep. Seth Moulton’s failed Presidential Campaign. After Rep. Moulton suspended his campaign, she became the Executive Director of the progressive Serve America PAC, founded by Seth Moulton. She returned as a Fox News Contributor in September 2019. Two months later, Fox News host Steve Hilton accused Harf of engaging in a cover-up of Joe Biden’s “corruption” in the Ukraine, where the former Vice President’s son Hunter was paid as much as $600,000 annually by a gas company despite no previous experience in the industry.

Prior to working for Fox News, Harf also worked at the Directorate of Intelligence at the CIA as an analyst focusing on Middle Eastern leadership issues. She later became the media spokesperson of the CIA. During the 2012 presidential election, she reportedly helped craft U.S. President Barack Obama’s national security and communications strategy, and also served as campaign spokesperson on national security issues. In June 2013, Harf was appointed Deputy Spokesperson for the Department of State, where she served as deputy under Jen Psaki

Harf also served as an acting spokesperson at the U.S. Department of Defense under Secretary of Defense Chuck Hagel until May 13 2015 before she began a new role as Senior Advisor for Strategic Communications to Secretary of State John Kerry, continuing her work leading the Iran nuclear negotiations communications strategy. She served in this position until President Obama’s exit from the white house.

In 2015, Harf appeared in an interview on the television show “Hardball with Chris Matthews” which aired on CNBC; the episode was aired a day after a video released by ISIS or the Islamic State of Iraq and Syria, showing them beheading 21 Egyptian Coptic Christians in Libya. These construction workers were kidnapped and ISIS was threatening to kill, subsequently by beheading. In the interview, she mentioned that the US strategy towards ISIS was to ‘…not kill their way out of the war but to find a longer term medium to go after the root of recruitment of ISIS,’ suggesting that people perhaps needed more job opportunities, rather than joining such groups. Critics ridiculed her, spreading a hashtag on social media #JobsforISIS. The issue became a top 10 trending topic in the United States on Twitter.

Marie has an estimated net worth of$1 million.