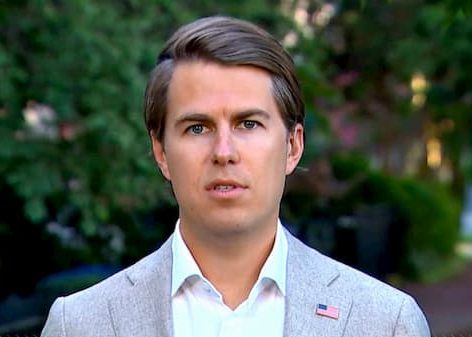 Miles Taylor is a former homeland security chief of staff, CNN contributor, Google staffer and co-founder for Republican Political Alliance for Integrity & Reform (REPAIR). He has identified himself as the Anonymous Author of an Op-ed in the New York Times “I Am Part of the Resistance Inside the Trump Administration.”

How Old is Miles Taylor

He holds a Bachelor of Arts degree in International Security Studies from Indiana University, which he attended as a Harry S. Truman Scholar and Herman B. Wells Scholar. He later joined Oxford University as a Marshall Scholar for his postgraduate studies from where he received an M.Phil. in International Relations.

Miles’s marital status is unknown as he has managed to keep his personal life private.

His sexual orientation is unknown.

He is a Republican.

White House Press Secretary Kayleigh McEnany claimed that Miles was incompetent during his time at DHS.

“He was ineffective and incompetent during his time as DHS Chief of Staff which is why he was promptly fired after only serving in this role for a matter of weeks. It is appalling a low-ranking official would be granted anonymity and it is clear the New York Times is doing the bidding of Never-Trumpers and Democrats.”

Trump campaign spokesman Hogan Gidley, a White House staffer during the time Taylor worked at DHS, said. “This is the least impressive, lamest political ‘reveal’ of all time. I worked with DHS officials while I was in the White House, and even I had to research who Miles Taylor was.”

Miles is a CNN contributor since August 2020.

Taylor joined Google in 2019 as the head of national security policy engagement, his role was overseeing Google’s national security policy efforts, including Google work related to the defense, law enforcement and security. Before he went on leave in August he changed roles to U.S. lead for advanced technology and security strategy, where he’ll focus on driving Google’s agenda related to AI, quantum computing, cybersecurity and emerging digital threats.

Miles wrote an Op-ed in The New York Times in 2018 titled, “I Am Part of the Resistance Inside the Trump Administration.” He anonymously wrote that “many of the senior officials in his own administration are working diligently from within to frustrate parts of his agenda and his worst inclinations.”

He tried to distance himself from the Trump administration’s decision to separate immigrant families entering the country, despite the fact he worked closely on the policy.

He also alleged that Trump withheld funds from the Federal Emergency Management Agency for Californians dealing with the fallout from wildfires because the state didn’t support him and because it wasn’t a base for him “politically.” He also claimed Trump wanted to push the boundaries on border policies for the purpose of scaring off potential violators.

“More than two years ago, I published an anonymous opinion piece in The New York Times about Donald Trump’s perilous presidency, while I was serving under him. He responded with a short but telling tweet: “TREASON?””

He added that “those works was not about eminence (they were published without attribution), not about money (I declined a hefty monetary advance and pledged to donate the bulk of the proceeds), and not about crafting a score-settling “tell all” (my focus was on the President himself and his character, not denigrating former colleagues).”

He claimed that after the op-ed was published he has been joined by an unprecedented number of former colleagues who’ve chosen to speak out against the man they once served.

“…since the op-ed was published, I’ve been joined by an unprecedented number of former colleagues who’ve chosen to speak out against the man they once served. Donald Trump’s character and record have now been challenged in myriad ways by his own former Chief of Staff, National Security Advisor, Communications Director, Secretary of State, Secretary of Defense, Director of National Intelligence, Vice Chairman of the Joint Chiefs of Staff, and others he personally appointed.”

He had previously denied being “Anonymous” during an interview with CNN’s Anderson Cooper in August  2020. Cooper asked Taylor in the interview, “There was an op-ed, there was a book, by someone calling themselves ‘Anonymous.’ Are you aware of who that is?”

“I’m not. That was a parlor game that happened in Washington, D.C., of a lot of folks trying to think of who that might be. I’ve got my own thoughts about who that might be —” Taylor replied.

“I wear a mask for two things, Anderson: Halloween and pandemics. So, no,” says @MilesTaylorUSA, when asked by @AndersonCooper if he is the author of the op-ed book written by someone called Anonymous. pic.twitter.com/sPjs4OoAnp

Donald Trump has denied knowing Miles and after he revealed he was the anonymous writer he claimed he never even heard of him and alleged the article was a scam. He also said CNN should fire him.

Who is Miles Taylor? Said he was “anonymous”, but I don’t know him – never even heard of him. Just another @nytimes SCAM – he worked in conjunction with them. Also worked for Big Tech’s @Google. Now works for Fake News @CNN. They should fire, shame, and punish everybody….

Miles is part of the Lincoln Project, an American political action committee formed in late 2019 by a number of former Republicans. The goal of the committee is to prevent the reelection of Donald Trump in the 2020 presidential election.  In August 2020 he made an ad for Republican Voters Against Trump, denouncing Trump and endorsing Biden in the 2020 presidential election.