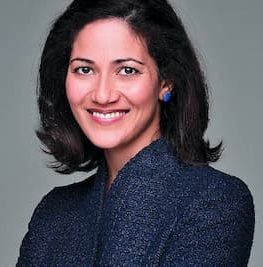 Mishal Husain-Hashmi is a British media personality working for BBC Television and BBC Radio. She is the main Sunday presenter of the BBC News at Ten and BBC Weekend News and one of the main presenters of BBC Radio 4’s Today and previously worked at Bloomberg Television as a producer and presenter.

Husain was born on 11 February 1973 in Northampton, United Kingdom.

Husain is the daughter of Imtiaz Husain{Tazi} and Shama Husain. Her mother was a teacher and former producer for Pakistan Television Corporation, while her father was a consultant urological surgeon at Bedford Hospital. He attended King Edward’s Medical College in Lahore, Pakistan, where he obtained his medical degree. He previously served as a registrar at Northampton General and he died of cancer on 19 November 2016. Husain says she never got to thank her late father for starting her on the path to journalism. In an exclusive interview she said, “Had my parents moved from Pakistan to any other European country, I don’t think, as the daughter of Muslim immigrants, I could have had a comparable career.”

Mishal is the granddaughter of Syed Shahid Hamid the 1st Director-General of Inter-Services Intelligence of the Pakistan Army and a 2 star general in the Pakistan Army and a close associate of President Ayub Khan, he played an instrumental role in bringing Field Marshal Ayub Khan to power in the 1958 coup d’état that overthrew the government of President Major-General Iskander Mirza. Hamid was the first Master General of Ordnance (MGO) of the Pakistan Army. He also authored numerous books, most notably Autobiography of a General. He attended the Colvin Taluqdar school (Lucknow) in 1923 before joining the Aligarh Muslim University, where he received a B.A. and an M.A. in Mathematics.

Mishal was brought up alongside her younger brother Haider Husain.

Husain is married to Meekal Hashmi, the General Counsel EMEA and on the board of Neuberger Berman,an investment management company, and previously served as the General Counsel at Old Mutual Asset Managers (OMAM) as well as a trainee solicitor at Trowers & Hamlins and qualified in 1997. He was also an associate at Magic Circle law firm Clifford Chance before joining Barings Asset Management as Legal Counsel and also sat as a Deputy District Judge at City of Westminster magistrates He graduated in Psychology from Edinburgh University and attended the College of Law. Meekal obtained his Master’s in International Finance & Banking Law from the London School of Economics in 1995.

Husain and Meekal tied the knot in July 2003.

Mishal and her husband have three sons together, Rafael,  and twins Musa and Zaki.

Mishal joined the BBC in 1998 as a junior producer in the newsroom and for the News 24 channel, and then in the Economics and Business Unit. She has since served on the daily Breakfast programme, on Asia Business Report (based in Singapore), and as a presenter of business news on both BBC World News and the BBC News Channel. From September 2002 she was the corporation’s Washington correspondent, serving as the main news anchor through the buildup to the invasion of Iraq and during the war. She has interviewed many high-profile figures including Paul Wolfowitz, Richard Armitage, Richard Perle, Paul Kagame and Emmerson Mnangagwa.

On 8 May 2010, she published an autobiographical essay in The Independent based on a nostalgia trip to the UAE. In 2011, Husain hosted Impact on BBC World News, but in spring and summer 2011 she was engaged in making a documentary on the Arab Spring, for airing in the autumn of 2011. She presents the Sunday evening editions of the BBC Weekend News on BBC One. On 2 December 2011, it was announced that Husain would be part of the BBC’s Olympic Presenting team.

In 2013, Husain interviewed the Burmese Leader Aung San Suu Kyi. During the intense cross-examination, “Kyi lost her cool following a tense interview”. It was claimed Suu Kyi was heard muttering “no one told me I was going to be interviewed by a Muslim”. On 27 November 2017, she recorded an interview with Prince Harry and Meghan Markle. Prior to joining BBC, she previously worked as a city reporter in Islamabad, Pakistan, at the English-language newspaper The News and also worked at Bloomberg Television in London from 1996, where she was a producer and presenter.

In January 2014, Husain was awarded the Services to Media award at the British Muslim Awards and she also won the Broadcaster of the Year Award at the London Press Club Awards in 2015.

Husain has written a book, The Skills, a guide for women on how to achieve their career goals. It was published in 2018, and was described as “the ultimate handbook for women.”