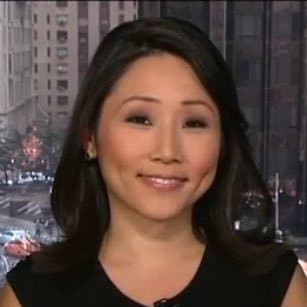 MJ Lee (birth name; Min Jung Lee) is a media personality serving as a political correspondent for CNN based in Washington. She previously served as a finance and politics reporter at Politico.

She belongs to Asian ethnicity

Lee attended Hong Kong International School (an American-system-style school). In her junior years, she moved to the United States to attend a boarding school. She has a bachelor’s degree in Government and Chinese from Georgetown University.

MJ was born and raised in Seoul, South Korea. She has not revealed much about her family but she has shared a photo of her mother on Instagram.

Happy Mother’s Day to all of the mothers out there, and my mom, who is so kind, gentle and beautiful. ❤️

Min is married to Alex Burns, an American journalist serving as a national political correspondent for The New York Times and a political analyst at CNN.

❤️ How it started vs. how it’s going… Exactly seven years ago, I was the absolute luckiest girl, getting to marry this man. Today, we went to go check on our little girl (!!!!) and she is doing great — we cannot wait to meet her in just a few months! Happiest anniversary @alexanderiburns — this is without a doubt the best of our journeys yet. 👶🏻❤️❤️❤️

As of 2020 Lee doesn’t have a baby but is pregnant expecting a baby girl.

Probably baby girl’s 10th visit to Wilmington so far this year? 😎 We’re ready for Election Day! (And thank you very much for all the kind messages from everyone I didn’t manage to confuse with my last post! I did not mean to bury the lede.) (📸 @benglish11211)

MJ joined CNN in 2014 and serves as a correspondent covering politics, campaigns and national breaking news stories. She covered the 2020 presidential elections.

She previously focused on the national #MeToo movement — particularly, its implications on Capitol Hill and in government. She has broken news on major misconduct allegations involving elected officials and political figures including Rob Porter, Rep. Blake Farenthold and Sen. Al Franken, as well as on the legislative debate in Washington to reform the culture surrounding sexual harassment.

She covered the Republican efforts to repeal the Affordable Care Act in 2017, reporting on both the heated political deliberations in Washington and the real-life implications of proposed policy changes across the country. Prior to her healthcare coverage, she traveled the country extensively covering the 2016 presidential election, focusing her reporting on Donald Trump during the primaries and Hillary Clinton in the general election.

She previously served as a finance and politics reporter at Politico in Washington, D.C. She began her career in journalism interning for The Washington Post and South China Morning Post while in college.