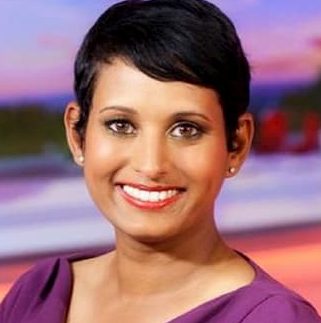 Naga Munchetty born Subha Nagalakshmi Munchetty-Chendriah  is a British media personality working for the BBC. She regularly presents BBC Breakfast, Newsnight and Victoria Derbyshire. She previously presented BBC World News and also served as a reporter for Reuters Financial Television,  a senior producer for CNBC Europe, a business producer and reporter for Channel 4 News and a presenter on Bloomberg Television.

Naga is a British.

Naga attended  Graveney School in Tooting . She then joined Leeds University where she studied English Literature and later took a postgraduate degree in Newspaper Journalism,

Naga is the daughter of  Muthu Chendriah who is an Indian while her father is  Mauritian whose name she hasn’t revealed . Both her parents had moved to Wales to pursue higher studies in the early 1970s. While her mother studied dentistry, her father undertook training to become a qualified nurse. The two crossed paths, fell in love, and got married in London. Both her parents went on to work at a hospital where her mother switched her career from dentistry to nursing.

Munchetty was raised alongside  her sister Mimi but not much is known about her.

Naga is married to  James Haggar, who is an British actor and director. They met at  a public event and started dating in 2005. The  two later tied the knot in 2007. Munchetty had previously been in a long-term relationship with Jonny Hansen a Norwegian former footballer, who last played as a midfielder for IF Fram Larvik but the relationship ended.

Munchetty was introduced to golf by her husband during a  visit to South Africa Eventually, she became an avid golf player with a handicap of nine in 2015. She emerged as the winner of the ‘Hertfordshire de Paula Cup’ which was held at ‘Bishops Stortford Golf Club’ in October 2012. Miguel Angel and Rory are among her favorite golfers.

Prior to playing golf, Naga  plays jazz trumpet and classical piano and  also makes cocktails, a skill she learned while working in bars and pubs during her student days.

Naga was a contestant on the fourteenth series of Strictly Come Dancing, having been paired with Pasha Kovalev, and being voted out in week four (Sunday 16 October 2016). She co-presented Britain’s Classroom Heroes with Sean Fletcher in October 2017.

Naga  lost a significant amount of weight after weeks of gruelling training as she participated in  Strictly Come Dancing.

Naga joined the BBC Working Lunch team in 2008. Later in October 2008, she started co-hosting ‘BBC Two’s’ television show ‘Working Lunch.’  after it was re-launched. The show covered personal finance, business, and consumer news until it was cancelled in July 2010. Munchetty went on to host the weekly personal finance radio show ‘Money Box’ that airs on ‘BBC Radio 4.’

Munchetty currently works for ‘BBC News,’ reporting from the City of London. Here she reports on matters  financial news, such as the ‘Pre-Budget Report’ and ‘Budget.’ She has  presented early morning bulletins on ‘BBC World News’ and ‘BBC News Channel. She has contributed  to many shows including, ‘The Spending Review – The South Today Debate’ on ‘BBC One’, The BBC documentary ‘Fear and Faith in Paris looking at anti-Semitic attacks in Paris and their impact on the Jewish community of France,‘Paranormal Investigation: Live’, and ‘Sunday Morning Live’ .

She won Celebrity Mastermind, which was broadcast on 2 January 2013. In June 2016, she replaced Sian Williams as presenter of Sunday Morning Live on BBC One. In 2017, she was replaced by Emma Barnett and Sean Fletcher. On 26 August 2016, Munchetty presented an episode of Newsnight on BBC Two and in 2017, she joined the cast of CBBC sketch show Class Dismissed playing a fictionalised version of herself as a Media Studies teacher who acts like a newsreade

Prior to working for BBC, Naga also worked at  Reuters Financial Television, CNBC Europe, Channel 4 News and Bloomberg Television. She is also  the director of ‘Naga Munchetty Limited.