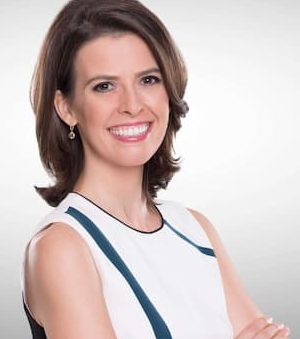 Nancy Hungerford is an American media personality working as an anchor and reporter for CNBC based in Singapore. She serves as the co-anchor of CNBC’s Street Signs and previously worked for News Corporation in London and the Fox Business Network in New York City as well as the Geneva Motor Show.

She was raised in the Detroit area but her exact date and year of birth are unknown.

Nancy graduated from the University of Virginia with a Bachelor of Arts in foreign affairs and history. She later attended the London School of Economics and Political Science, receiving a Master of Science in European Political Economy.

Nancy was born and brought up by her parents in the Detroit area but she has kept her family life off the limelight and she hasn’t revealed any information regarding her parents.

She has not revealed any information regarding her siblings.

Hungerford has kept her personal life off the public eye and she has not revealed any information about whether she is married, dating or single.

Information on whether she has children is unavailable.

Nancy is the co-anchor of CNBC’s Street Signs, based in Singapore. The program follows the day’s market moves and provides viewers with actionable, real-time insights. She has covered some of the most influential business and political events across the Asia Pacific, including the G20 Summit in Japan, where she interviewed US Treasury Secretary Steven Mnuchin at the height of trade negotiations with China. She reported breaking news from President Trump’s historic meeting with North Korean leader Kim Jong Un in Singapore, as well as Trump’s visit to the Asia-Pacific Economic Cooperation (APEC) meetings in Vietnam. From the APEC conference, Nancy also interviewed former Malaysian Prime Minister Najib Razak about allegations of 1MDB involvement while he was still in office.

Prior to joining CNBC, she was previously a General Assignment Reporter and Anchor in London where she reported regularly on Brexit negotiations and the French election. She spoke to Heads of State, Finance Ministers, and Foreign Ministers regularly from Brussels. She also covered French corporates, interviewing CAC 40 executives each earnings season.

She also worked at the Geneva Motor Show in the Detroit area where she was raised. She fronted coverage of the Volkswagen diesel scandal and conducted one of the first interviews with former CEO Matthias Müller in his new role. She has interviewed other top auto executives, including GM CEO Mary Barra. Nancy also covered Europe’s flagship tech conferences, interviewing industry leaders such as Former CISCO CEO John Chambers and Sequoia Capital’s Michael Moritz.

Her average annual salary is unknown.

Nancy’s estimated net worth is unknown.