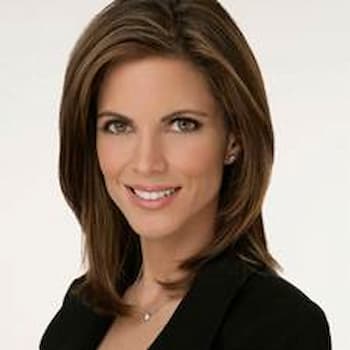 Natalie Morales-Rhodes-born Natalie Leticia Morales is an American media personality working for NBC News as the Today Show West Coast anchor and appears on other programs including Dateline NBC and NBC Nightly News. She previously served as a weekend anchor/reporter and morning co-anchor at WVIT-TV in Hartford, Connecticut.

Natalie is the daughter of Lieutenant Colonel Mario Morales Jr and Penelope Morales. Her father, a Puerto Rican is a retired Air Force veteran of the Persian Gulf and Vietnam War. In an interview, Natalie said, “I got to see the world at a young age because of my dad. And I can honestly say it’s the reason I’m a journalist. It’s the reason I am who I am today.” Her mother grew up in the tiny town of Minas Gerais, Brazil, had a tough childhood  “I think I’ve learned from my mom to always know where you come from, and stay true to who you are. She is somebody who has never wavered, she is humble to the core. She is strong. She’s just magnificent,” says Natalie. “My mom is, simply put, the most amazing woman I know… the person I strive to be.” Penelope put herself through college and it was there she met Natalie’s dad, who was serving in the military. They fell in love and married.

Natalie was brought up alongside her sister but she hasn’t revealed any further information regarding her.

Natalie is married to Joe Rhodes the son of  Kay Rhodes and Joseph S. Rhodes. His dad was the managing director of Prudential Insurance Company’s financial services division in Chicago. Joe attended the University of Colorado Boulder where he majored in finance and later received his MBA from Columbia’s Business School. He is currently the managing director of his own firm, Stockton Road Capital, which he founded in 2008. He is also a managing partner of Hummingbird Brands LLC and also the president of Lenny & Larry’s LCC.

Joe previously worked as an investment banker at Kidder, Peabody& Co and also worked for Union Bank of Switzerland as well as an investment specialist in Mergers and Acquisitions Group and also Charterhouse Group Inc. The pair exchanged their marriage vows on August 22, 1998, after a few years of dating in a ceremony attended by close family members and friends and officiated by the Rev. Donald Bossart, a United Methodist minister, at Phipps Mansion in Denver, CO.

Natalie and her husband are proud parents of two sons, Joseph Stockton Rhodes born in 2004 via C-section at Hoboken’s St. Mary Hospital, and  Luke Hudson Rhodes born on September 9, 2008.

Morales bought a newly built home in Brentwood for $6.8 million. Tucked behind privacy gates, the East Coast-inspired house has a traditional yet contemporary vibe with French iron doors, elegant fixtures and light wood floors. Gray-painted brickwork and crisp white siding provide a visual contrast to the exterior. Within the 7,020 square feet of refined space are a two-story entry, a living room with a fireplace, a blue-hued library/den with built-in bookshelves and a chef’s kitchen with an oversized island. A wine wall set within tempered glass sits off the formal dining room. Upstairs, the master suite has a fireplace, a boutique-inspired closet and a balcony that overlooks the grounds. There are six bedrooms and 5.25 bathrooms in all. Bi-folding doors open to a terrace patio with an outdoor fireplace and an alfresco dining area. Lawns, hedges and a rectangular swimming pool and spa complete the roughly quarter-acre setting. In 2002 they purchased a US$1 million townhouse in Hoboken, New Jersey, and expanded it in 2008 to 3,600 square feet. In June 2016, after Morales was made the Today show’s West Coast anchor, the family put the Hoboken townhouse on the market and moved into the new house in Brentwood.

Morales serves as the Today Show West Coast anchor and appears on other programs including Dateline NBC and NBC Nightly News. She joined the Today show in 2006 as a national correspondent and was named co-anchor of the third hour of the show in March 2008. On May 9, 2011, it was announced that Morales would replace Ann Curry as the news anchor for Today, when Curry succeeded Meredith Vieira as host of Today in June 2011. In 2016 it was announced that she would be moving west to host Access and become the Today Show West Anchor. In 2019 Morales stepped away from hosting Access and remained on as the Today Show West Coast anchor.

Prior to joining NBC News, Natalie previously served as an anchor and correspondent for MSNBC from 2002 to 2006. She covered a number of major news stories there including the 2004 Presidential election, the 2004 Summer Olympics in Athens, Greece, the Iraqi prisoner abuse, Operation Iraqi Freedom, the Space Shuttle Columbia disaster, the Northeast Blackout of 2003, the 2002 Beltway sniper attacks and the investigation and trial of Scott Peterson. Additionally, she was named one of Hispanic Magazine’s Top Trendsetters of 2003.

She also served as a weekend anchor/reporter and morning co-anchor at WVIT-TV in Hartford, Connecticut, where she reported on the Columbine shootings, Hurricane Floyd, the 2000 Presidential election, and the September 11, 2001 attacks. She also co-hosted and reported for the Emmy-nominated documentary, Save Our Sound, a joint production with WNBC on preserving the Long Island Sound. In 1999, she was voted one of the 50 Most Influential Latinas for her news coverage and reports by the Hispanic daily newspaper El Diario La Prensa. Previously, Morales spent two years working behind the scenes at Court TV. Morales also worked at Chase Bank before pursuing her journalism career. She began her on-air career at News 12 where she also served as a camera operator, editor, and producer.

She earns an average salary of $ 2 million.

She has an estimated net worth of $8.5 million.