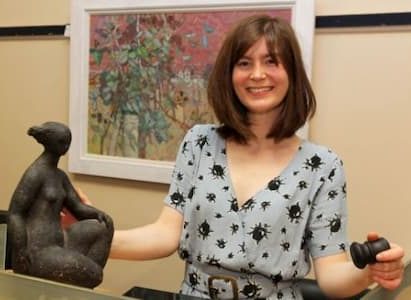 Natasha Raskin is a Scottish television and radio personality, antiques and art expert. She appears on Antiques Road Trip and Bargain Hunt. She is also a broadcaster for BBC Radio Scotland.

She was born on November 28, 1986 in Glasgow, Scotland, United Kingdom.

Natasha stands at a height of 5 feet 8 inches tall.

Raskin graduated from Glasgow University with a degree in history of arts and French. She had previously enrolled to pursue a degree in law before dropping out from college and later pursued arts and antiques.

Natasha is the daughter of Phillip and Barbara Raskin. They presided over the Inn on the Green restaurant for nearly twenty years.

She is the daughter of Philip Raskin, a contemporary Scottish artist who specialises in landscapes and seascapes. He studied at The Glasgow School of Art in the sixties but did not complete his course due to his father’s sudden and untimely death.

Natasha said her passion for antiques was inspired by her father who took her to her first auction. She added that her father thought she was “well-suited to the environment” of an auction.

“I was gently nudged in the direction of the antique trade and auction houses by my dad, who thought that I’d be well-suited to the environment. Although I’d never normally admit it, he was absolutely right!”

Natasha is married to Joe Sharp since 2016. The couple works together on Antiques Road Trip as Joe works as a producer and director of the show.

It is unknown if Natasha has any children as she likes to keep her personal life private.

Raskin Sharp is an antique expert. She ran an art supply business with her father. In 2011 she became an intern at Glasgow auction house McTear. This was after the auction house had invited her father to sell his work there and she accompanied her.

During an interview with Sunday Post she said; “I’d never been to an auction. So I went along with him and it was such a buzz I immediately got him to ask them for a job. At first, there wasn’t an opening, but I phoned and phoned and finally they gave me an internship in 2011.”

She later employed full-time where she served as a Head of Pictures, valuer and auctioneer, dealing mainly with Scottish contemporary art. She quit the job after she became an auction expert in television and was unable to juggle all the work.

Natasha joined Bargain Hunt in 2013 as an expert. She was scouted by a series producer while she was at an auction in Glasgow. “A previous Series Producer of Bargain Hunt saw me on the rostrum in Glasgow and, for whatever reason, decided that she liked my style. I’m glad that she did and owe her a lot – I doubt that I’d be here otherwise.”

She is a broadcaster for BBC Radio Scotland where she presents a late-night music show. She plays an eclectic mix of musical genres.

Natasha worked in the primary elections of 2008 for Barack Obama in New Hampshire, during which he referred to her as part of “the Scottish contingent” of his team, and provided her with a signed reference for her work.