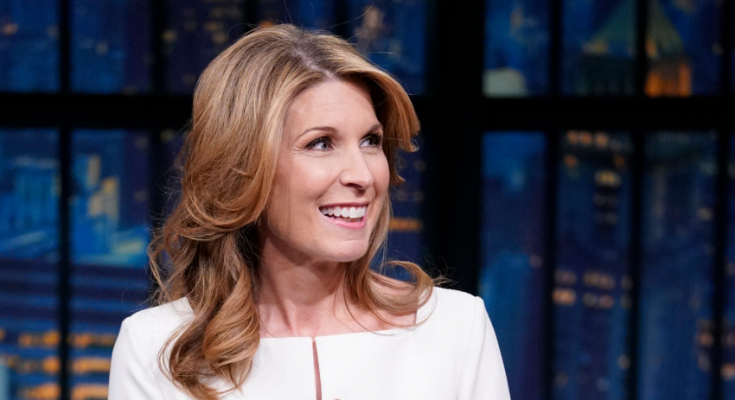 Nicolle Wallace is an American television host and author. She is known for her work as the anchor of the MSNBC news.  In her former political career, she served as the White House Communications Director during the presidency of George W. Bush and in his 2004 re-election campaign. She also served as a senior advisor for John McCain’s 2008 presidential campaign. In addition, she is the author of the contemporary political novels Eighteen Acres, It’s Classified, and Madam President.

She graduated from Miramonte High School in 1990, received a Bachelor of Arts in mass communications from the University of California, Berkeley in 1994, and a master’s degree from Northwestern University’s Medill School of Journalism in 1996.

Her mother was a third-grade teacher’s assistant in public schools, and her father was an antiques dealer.

She is the eldest of four children.

On September 3, 2014, ABC announced Wallace would join The View as a new co-host alongside newcomer Rosie Perez. She made her debut as a co-host on the premiere of the series’ 18th season on September 15, 2014. She exited the series at the end of the season.

In a new interview with the Los Angeles Times, Wallace broke down why she believes she was fired from The View after just one season as a co-host.

She said that she “loved” her time on the ABC talk show, but explained that the network felt she was too “calm” for that format.
“I think the problem was it wasn’t contentious that season I was on,” Wallace said. “Being fired from a TV show where you think you’re kind of baring your soul feels personal because it is. It’s like being broken up with. Because I never worked in entertainment I think what I didn’t understand is: It really was a casting, and it was a casting they didn’t like.

Following her departure from The View, she joined NBC News and its cable network MSNBC as a political analyst. She is also a frequent contributor and guest host on MSNBC programs The 11th Hour with Brian Williams and Morning Joe as well as on NBC’s Today Show.

In November 2016, she served as an analyst for MSNBC’s live coverage of election results, which was anchored by Brian Williams, Rachel Maddow, and Chris Matthews. Since May 9, 2017, she has been the anchor of the afternoon news and opinion program Deadline: White House on MSNBC. Deadline: White House garnered a total of 2 million viewers in July 2020, and in the following month, it was expanded to two hours.

Wallace joined the White House staff during George W. Bush’s first term, serving as Special Assistant to the President and Director of Media Affairs at the White House, where she oversaw regional press strategy and outreach. In 2003, she joined Bush’s 2004 presidential campaign as its Communications Director, wherein according to The New York Times she “delivered her political attacks without snarling.”

On January 5, 2005, Bush named Wallace White House Communications Director. The New York Times story announcing her presidential appointment carried the headline: “New Aide Aims to Defrost the Press Room” and described Wallace’s intentions “to improve the contentious relationship between a secretive White House and the press.” According to The Washington Post, she served as “a voice for more openness with reporters”, and former colleagues describe her as having been “very persuasive in the halls of the West Wing.” She left the White House in July 2006 to relocate to New York City, where her husband Mark was representing the Bush Administration at the United Nations.

She served as a senior advisor for the John McCain 2008 presidential campaign. She appeared frequently on network and cable news programs as the campaign’s top spokesperson and defender.

In late October 2008, campaign aides criticized vice-presidential candidate Sarah Palin. One unnamed McCain aide said Palin had “gone rogue,” placing her own future political interests ahead of the McCain/Palin ticket, directly contradicting her running mate’s positions, and disobeying directions from campaign managers. In response to reports of dissension within the McCain-Palin campaign, Wallace issued a statement to both Politico and CNN saying: “If people want to throw me under the bus, my personal belief is that the most honorable thing to do is to lie there.”

She is the author of the 2010 novel Eighteen Acres (a reference to the 18 acres on which the White House complex sits), a fictional narrative about three powerful women at the top of their careers: the first female U.S. President, her chief of staff, and a White House correspondent. Wallace said, “It’s my best attempt at a story that I hope people will pick up and read and enjoy and maybe feel like they’re getting to see what it’s really like in the White House in this entirely fictional story.”

Patrick Anderson of The Washington Post wrote, “To say that Nicolle Wallace’s ‘Eighteen Acres’ is one of the best novels I’ve read about life in the White House may be faint praise—there haven’t been many good ones—but her book is both an enjoyable read and a serious look at what high-level political pressures do to people.” Craig Wilson of USA Today wrote, “Nicolle Wallace actually knows what she’s talking about” and Ashley Parker of The New York Times called the book “an engaging, easy read.” TV personalities such as George Stephanopoulos, Rachel Maddow, John King, and Andrea Mitchell also praised Eighteen Acres.

In September 2011, she published the sequel to Eighteen Acres, It’s Classified, about a fictional presidential campaign troubled by a mentally ill vice presidential candidate. Wallace said the premise was inspired by her experience as a senior adviser to the McCain/Palin campaign. Her third novel, Madam President, was released in April 2015.

Her net worth is approximately $3 Million.