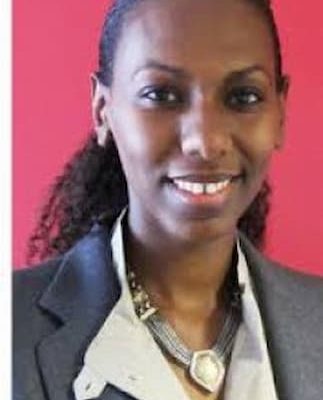 She was born in July 1978  in Khartoum, Sudan but her exact date of birth is unavailable.

She is a Sudanese.

She holds a BSc in Philosophy from The London School of Economics and she is fluent in Arabic and English.

Elbagir is the daughter of Ahmed Abdullah Elbagir and Ibtisam Affan. Her father was a journalist and politician  who was jailed before her birth for being government opposition and his  newspaper “AlKhartoum.” was printing in Khartoum, London, Cairo, Saudi Arabia and the UAE .He earned a PHD in political science from the University of Exeter in the UK .Her mum is his business partner and was the first publisher in Sudan.

Nima was brought up alongside her siblings, two sister Yousra Elbagir and Safia Elbagir and a brother. Yousra studied Social Anthropology at the University of St Andrews and now works  in Khartoum, Sudan as a writer for the Guardian, CNN Africa, Reuters Africa and she is also Content manager for their family production company, Elephant Media.  Safia  a doctor while her  brother used to run their printing press before evolving  the family trade into new media by founding Elephant Media.

Nima is married to Mark, a Brit she met while in Sudan . While receiving the 2018 Excellence in International Reporting Award ,she praised her husband for being supportive, “I have to thank my wonderful husband Mark. So many people have been coming up to our table just to check he’s real, because it is so rare that he and I are actually in the same place at the same time. To be completely honest, I am probably not the best wife. I feel like a bit of a bad feminist admitting that, but I’m probably not the best wife. I’m sure that poor Mark is really not the envy of many people, because I’m pretty sure there aren’t many boys or girls who grow up dreaming of marrying someone who leaves unpacked, messy piles of clothing while she’s away and then is permanently exhausted when she’s back.”

Nima and her husband has a son together but she hasn’t revealed any further details about him.

Last year Elbagir traveled to Yemen to continue her ‘Made in America’ investigation into the use and transferring of American-made weapons from the Saudi-led coalition to al Qaeda-linked groups and other hardline militias in Yemen. It followed her August 2018 report which confirmed the bomb that killed 40 children on a school bus in Yemen was made in the US.

Elbagir joined CNN in February 2011 as a Johannesburg-based correspondent before moving to the network’s Nairobi bureau and later London. She has reported rom a modern day slave market in Libya, to child labor in Congo, and a smuggler’s network in Nigeria, documented rarely seen exploitation and corruption.”

In 2018 Elbagir investigated the use of child labor in cobalt mines in the Democratic Republic of the Congo after which the manufacturer of Mercedes-Benz — Daimler — announced an audit of its entire supply chain. She also reported from Sudan on the case of Noura Hussein, the Sudanese teenager who was sentenced to death for killing her rapist husband. Following CNN’s exclusive reporting of Hussein’s first-hand account, a Sudanese court overturned her death sentence after accepting Hussein’s version of events.

In the fall of 2017, Elbagir traveled to Libya with producer Raja Razek and photojournalist Alex Platt to investigate reports of African migrants being sold at slave auctions. Carrying concealed cameras into a property outside the capital of Tripoli, Elbagir and Razek witnessed a dozen African migrants auctioned off — some for as little as $400 — in less than 10 minutes. The report was instrumental in the passage of unprecedented United Nations sanctions against six men identified as traffickers by the U.N. Libya Sanctions Committee in June 2018.

At immense personal risk, Elbagir reported on the Ebola outbreak that ravaged West Africa in 2014, going inside Liberia’s quarantine zones and exploring the devastation the disease has wrought across both urban and rural communities. She was also the first international journalist to report from Chibok, the northern Nigerian village from which over 250 schoolgirls were kidnapped by the terrorist group Boko Haram in 2014. Here she was able to interview two young girls who had managed to escape, and who described the ordeal of the capture and the fear they now felt. Her continued reporting on the missing schoolgirls contributed to CNN’s Peabody Award win in 2015. Nearly two years after their abduction, Elbagir and producer Stephanie Busari obtained a ‘proof of life’ video for some of the kidnapped girls.

Elbagir also filed several exclusive reports on the story of Yehya Ibrahim, a Sundanese woman sentenced to death for committing apostasy — interviewing Ibrahim’s estranged family and her terrified husband. Her work on this story brought the attention of the world to Ibrahim’s plight, helping to generate the political pressure which eventually led the Sudanese government to grant her a reprieve. She also led CNN’s coverage on the spiraling violence which engulfed the Central African Republic, traveling with the French troops as they worked to broker peace between entrenched Muslim and Christian fighters.

She reported from Somalia at the height of the Horn of Africa famine, and was granted an exclusive phone interview with Safia Gadhafi, the former Libyan leader’s wife, in Tripoli. Following the revolution in Egypt, Elbagir interviewed the Justice Minister Mohamed Abdelaziz al-Juindy, who called for former Egyptian President Hosni Mubarak to face the death penalty. She also reported from South Sudan as the new African country celebrated independence..

In 2019, Elbagir and her team won plaudits for their year long investigation into Father Luk Delft: The case of the predator priest, a pedophile priest who was sent to work for an aid organization in Africa, helping vulnerable families, even though his Catholic order knew he had been convicted of abusing children years earlier in Europe. As a freelancer for CNN, she covered the escalating violence against women in the Congo; Nigeria’s 50th anniversary of independence; the South Sudanese Referendum; and CNN’s coverage of the Hajj.

Prior to  joining CNN, she worked in various capacities for the UK’s Channel 4 for a number of years starting in 2005: She freelanced from Kabul for Channel 4 News; reported for the “Unreported World” documentary strand; and both reported and presented for Channel 4 News and More4 News.

During this period, Elbagir’s exclusives included getting the first interview with the Aegis security company whistleblower on the Iraq “Trophy Videos” (2005); interviewing Jacob Zuma in the run-up to his rape trial (2006); being the only Western journalist reporting from Mogadishu during the U.S. bombing of Somalia (2007); and broadcasting the first televised evidence of Iranian weaponry smuggled to the Taliban (2009).

She also worked as a stringer with Reuters in 2002 reporting from Sudan, and one of the first to provide footage from inside Darfur; while also filing material for the Economist, the FT and Radio France International. She stayed on with Reuters as a London-based Graduate Trainee through to 2005.

Elbagir was named the 2020 Royal Television Society ‘Television Journalist of the Year’ and also received the prestigious 2019 Alfred I. duPont-Columbia University Award in the Investigative category for her reporting on human rights abuses. The International Women’s Media Foundation named Elbagir a recipient of the 2018 Courage in Journalism Award, joining an elite group of female journalists who have been recognized for reporting from some of the world’s most dangerous regions. She also received the 2018 International Center for Journalist’s Excellence in International Reporting Award for her work.

Elbagir’s shocking report from Libya, which sparked a global outcry, was recognized with a 2018 George Polk Award in the Foreign Television Reporting category, the Royal Television Society (RTS) Award for Scoop of the Year, a Golden Nymph Award in the Best TV News Item category at the Monte Carlo TV Festival, the Television Trophy at the Bayeux Calvados-Normandy Awards and two Association for International Broadcasting (AIB) Awards in the Impact and Daily Journalism – Video award categories.

Following her investigations into abuses perpetrated against women and children — including the sale of displaced Nigerian children to Boko Haram and the mutilation of British Somali girls by FGM practitioners in Nairobi — Elbagir was named the RTS 2016 Specialist Journalist of the Year.

She has an estimated net worth of $1million.