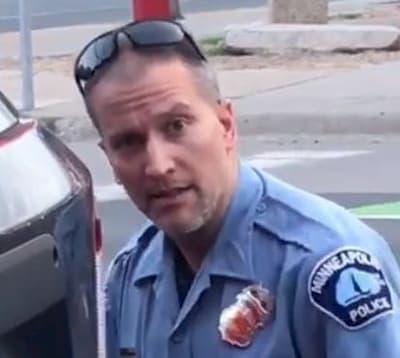 Derek Chauvin is a former Minneapolis police officer who kneeled on George Floyd’s neck as Floyd pleaded for help saying he can’t breathe before losing consciousness and later died. He has since been arrested and charged with third-degree murder and second-degree manslaughter.

Derek is married to Kellie Chauvin who is a realtor and former radiologist. She was born in Laos but fled to a Thai refugee camp with her family with only the possessions they could carry on their backs.

The couple first met in 2010 when Chauvin brought someone in for a health check at a Hennepin County emergency room where she was working. She has a degree in radiology. She has since changed careers and works in real estate.

The article notes that she was previously married at the age of 18 to a man she barely knew at her parents’ behest but after a decade of abuse she divorced him.

She described Chauvin as a softie and a gentleman, “under all that uniform, he’s just a softie. He’s such a gentleman. He still opens the door for me, still puts my coat on for me. After my divorce, I had a list of must-haves if I were ever to be in a relationship, and he fits all of them.”

After the death of George Floyd Kellie has filed for divorce according to a statement by her lawyer; “This evening, I spoke with Kellie Chauvin and her family. She is devastated by Mr. Floyd’s death and her utmost sympathy lies with his family, with his loved ones and with everyone who is grieving this tragedy. She has filed for dissolution of her marriage to Derek Chauvin. While Ms. Chauvin has no children from her current marriage, she respectfully requests that her children, her elder parents, and her extended family be given safety and privacy during this difficult time.”

On Monday, May 25 a video taken by a bystander shows Derek Chauvin with his knee pressed into George Floyd’s neck while he repeatedly says he can’t breathe. Chauvin keeps his knee pressed into Floyd’s neck and Floyd stops talking. About four minutes into the video, Floyd becomes unresponsive. Bystanders approach Chauvin and the officer draws something, causing one of the people off-camera to say, “He’s got mace.”

The bystanders repeatedly ask the officers to check for a pulse. Chauvin doesn’t remove his knee from the man’s neck until EMS puts an unresponsive Floyd onto a stretcher, roughly four minutes after he stopped responding.

According to The Minneapolis Police Department statement, the police officers responded to a call on the 3700 block of Chicago Avenue South on a report of a forgery in progress. Officers were advised that the suspect was sitting on top of a blue car and appeared to be under the influence.

“Two officers arrived and located the suspect, a male believed to be in his 40s, in his car. He was ordered to step from his car. After he got out, he physically resisted officers. Officers were able to get the suspect into handcuffs and noted he appeared to be suffering medical distress. Officers called for an ambulance. He was transported to Hennepin County Medical Center by ambulance where he died a short time later.”

According to a criminal complaint released on May 29, 2020 the officers (Officers Thomas Lane and J Alexander Kueng ) were dispatched to Cup Foods on the report of a man buying merchandise with a counterfeit $20 bill. Shortly after 8 p.m., the officers arrived with their body cameras activate and recording.

The officers learnt from the store worker that Floyd was parked in a car around the corner. The officers approached the car with Lane on the driver’s side and Kueng on the passenger side. Three people were in the car: Floyd, another man and another woman.

Lane pulled out his gun as he was talking with Floyd and asked him to put his hands on the steering wheel and Lane holstered his firearm. He then ordered Floyd out of the car and handcuffed him, but Floyd “actively resisted being handcuffed.” Once handcuffed he did not resist and walked with Lane to the sidewalk.

Lane took Floyd’s identification and name and asked him if he was “on anything” and told Floyd he was going to be arrested for passing counterfeit currency. Lane together with Keung stood Floyd up and attempted to take him to their squad car. Floyd then “stiffened up, fell to the ground and told the officers he was claustrophobic.” That’s when Officers Chauvin and Tou Thao arrived on the scene in a separate squad car.

According to the complaint, after making several attempts to get Floyd in the backseat from the driver’s side Floyd wouldn’t get in and would struggle with the officers by intentionally falling down.

Keung and Lane held Floyd’s back and legs and Chauvin placed his left knee in the area of Mr. Floyd’s head and neck.” Floyd repeatedly told the officers, “I can’t breathe” but they remained in their positions. They rold him “You are talking fine”, as he continued to struggle. At one point, Lane asked “should we roll him on his side?” To which Chauvin responded, “No, staying put where we got him.”

Lane said he was “worried about excited delirium or whatever” to which Chauvin responded, “That’s why we have him on his stomach.” They continued holding their positions.

At 8:24 p.m., Floyd stopped moving. Kueng then checked Floyd’s right wrist for a pulse and said “I couldn’t find one.” The officers continued to hold their positions.

At 8:27 p.m., Chauvin removed his knee from Floyd’s neck as medics arrived. Floyd was taken away in the ambulance. He was pronounced dead at Hennepin Healthcare.

On Tuesday Derek together with three other Minneapolis police officers were fired. Police Chief Medaria Arradondo said he had stayed up all night wrestling with his decision to fire the officers.

We did it!! Your calls to @jacob_frey led to the termination of all four officers 👏🏾 Now call DA Mike Freeman (612-348-5550) and tell him to ARREST & CHARGE these officers for the murder of #GeorgeFloyd. We must continue to fight for #JusticeForFloyd!! #SayHisName pic.twitter.com/2VHCS7doQp

Derek Chauvin Worked Together with Floyd at a Club

George and Derek worked together as security guards at the same nightclub, El Nuevo Rodeo club, but the owner of the club, Maya Santamaria said she wasn’t sure if they knew each other. Derek worked at the club for over 17 years until a few months ago while Floyd started working there recently as a bouncer and only worked about a dozen events put on by “African American promoters.”

According to Maya Santamaria, derek was a bit racist and when the club hosted events that drew a mainly black clientele Derek would be aggressive and would respond to fights by taking out his mace and spraying the crowd, a tactic she told him was unjustified “overkill.”

“He would mace everyone instead of apprehending the people who were fighting. He would call backup. The next thing you would know, there would five or six squad cars.”

She added that Chauvin got along well with the club’s Latino regulars, but his tactics toward unruly customers on what she referred to as “African American” nights led her to speak to him about it.

“I told him I thought this is unnecessary to be pepper-sprayed. The knee-jerk reaction of being afraid, it seemed overkill. It was a concern and I did voice my opinion, but police officers have a way of justifying what they do.”

She said she was schocked to see video of Chauvin pinned Floyd; “I thought he would have more of a conscience.Even if he is a bit racist, he’s a human being… At what point does your humanity overpower your racial bias?”

According to a report by Communities United Against Police Brutality, in 2006 Derek fired at a man named Wayne Reyes after the officers responded after Wayne stabbed his girlfriend.

“Minneapolis Police responded after Wayne stabbed his girlfriend and a male friend. He drove off, starting a police pursuit. When police stopped him, they claim he aimed a shotgun toward them. Six Minneapolis police officers- Dante Dean, Brian Grahme, Shawn Kelly, Oscar Macias, terry Nutter, and Derek Chauvin-fired on him. He was 42 years old.”

According to StarTribune, in 2008 he shot and wounded Ira Latrell Toles during a domestic assault call. According to a 2011 article from the Pioneer Press, Chauvin and other officers showed up to an apartment in south Minneapolis just before 2 a.m. Toles grabbed for an officer’s gun and Chauvin shot him in the abdomen.

“We have now been able to put together the evidence that we need. Even as late as yesterday afternoon, we did not have all that we needed. This is by far the fastest that we’ve ever charged a police officer.”

He is being charged with third-degree murder and second-degree manslaughter.