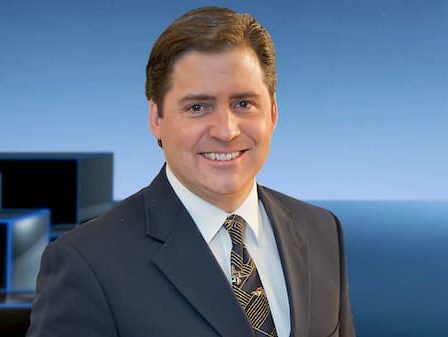 Pete Gallivan is an American media personality serving as a reporter and a Daybreak co-anchor at WGRZ-TV in Buffalo, NY. He also produces a weekly feature called “Unknown Stories of WNY”, which highlights local history.

His actual age is unknown.

Pete attended Buffalo Public Schools, graduating from the Buffalo Academy for the Visual and Performing Arts. He later joined The College at Brockport, where he majored in Communications.

Pete has not revealed the name of his parents but he said in an interview that his father was a teacher at the Williamsville School District. His mother was a politician who at one time served as Delaware District Councilmember.

He is married to Sarah, although there are fewer details available about when they got married or what Sarah does for a living.

Together with his wife, they have three children together; Brenna, Benjamin and Hannah.

In 1996 he joined WGRZ-TV where he began as a general assignment reporter and was part of the 2 On Your Side team until March 2013 when he accepted a job in Gov. Cuomo’s communications department.

He returned to WGRZ-TV on July 15, 2013 as a news and sports reporter/anchor, covering the issues and people of Western New York, as well as providing in-depth coverage and analysis of the Buffalo Sabres and Buffalo Bills.  He currently serves as co-anchor of the morning program “Daybreak”. His reporting has won 2 NYS Emmys, a regional Edward R. Murrow Award and an Associated Press Award. He was also part of the Daybreak team that won an Emmy for best morning newscast.

He began his broadcasting career in 1987 at a small, day-timer radio station in Brockport. He did sales, disc jockeyed, and ultimately became News Director at WASB. He later worked on local radio in Canandaigua, Warsaw and Rochester. It was in Rochester where he discovered his passion for visual story-telling, as a reporter at WHEC-TV and later WROC-TV.

A great day for a walk at the gorge.