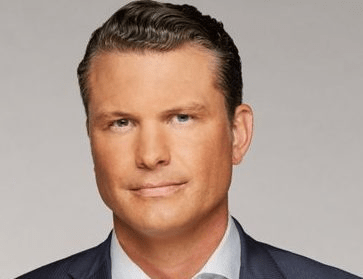 Pete Hegseth (Peter Brian Hegseth) is an international journalist and author. He joined Fox News in 2014 as a contributor and he is currently the co-host of Fox & Friends.

Hegseth attended Forest Lake Area High School in Forest Lake, Minnesota. He received his Bachelor of Arts from Princeton University in 2003 and a Master of Public Policy from the John F. Kennedy School of Government at Harvard University.

At Princeton, he was the publisher of The Princeton Tory, a conservative student-run publication.

Hegseth was pretty good at basketball, and he led his high school team to the Minnesota state tournament. He set the record for career three-pointers, but it was later broken by his younger brother. He went on to play for four more years at Princeton.

He is the son of American parents Penelope Hegseth, mother, and Brian Hegseth, father. Pete’s dad was a high school basketball coach, and he made basketball training a daily routine.

He has two younger brothers. Philip his brother is a May 2015 university graduate.

Pete married Meredith Schwarz in 2004, and the marriage lasted five years. He went on to marry Samantha Deering in 2010, and they looked to be having a happy marriage.

The marriage ended after it was discovered that Pete was having an affair with Fox executive producer, Jennifer Rauchet. Pete divorced Samantha in August 2017 and went on to have a relationship with Jennifer.

He proposed to Jennifer in June 2019, and they got married in August 2019. The marriage ceremony happened at Trump National Golf Club Colts Neck in New Jersey.

He had three sons with his second wife, Samantha Deering, and a daughter with his current wife, Jennifer Rauchet.

Pete currently serves as a co-host of FOX News Channel’s FOX & Friends Weekend (weekends 6-10AM/ET). He joined the network as a contributor in 2014.

While at FNC, he has provided analysis and commentary across the network’s daytime and primetime programming. Most recently, he co-hosted FNC’s All-American New Year special alongside FBN’s Lisa Kennedy Montgomery. During the special, Hegseth presented an exclusive interview with President Donald Trump.

Prior to joining FNC, he held the position of CEO for Concerned Veterans for America. Previously, he was an infantry Captain in the Army National Guard, and has served in Afghanistan, Iraq, and Guantanamo Bay. He holds two Bronze Stars and a Combat Infantryman Badge for his time in Iraq and Afghanistan.

Pete : I always wanted tattoos. Thankfully, my father dissuaded me early in life because what I wanted out of high school was a basketball hoop with a flaming basketball going through the hoop. All I cared about was basketball, I played basketball in college, my dad was a basketball coach.

It started with a cross on my forearm with a sword on the middle of it. It was designed by my wife and I to represent Matthew 10:34: ” I did not come to bring peace, but a sword.” Then it was off to the races. I had a lot of real estate and a lot of ideas.

The first one was on my left bicep, so small you wouldn’t even know I have it. Then the other ones, so far I said I’m going to confine myself to my right chest and my right arm. So I have 11 or 12 more on my right arm. I’d have it even more full if it were not for COVID at this point. I have a few blank spaces that are staring at me.

I knew inside my soul this was something I wanted to do and I’ve finally hit the chapter in my life that I’m able to do it.

He is the author of the following books;

As a Fox News contributor, Hegseth earns an annual salary of $250,000.

He has an estimated net worth of $3 Million.

He was recently banned on Twitter for posting screenshots of a terrorist manifesto.