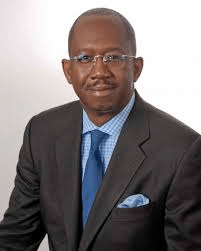 Pierre Thomas is an American journalist and serves as senior justice correspondent at ABC News. He was CNN Justice Correspondent from 1997 to 2000. Prior to that he was at The Washington Post. He has been with ABC News since 2000.

He graduated from Virginia Polytechnic Institute and State University in 1984 in Communication Studies.

Pierre’s father was a factory worker at Lynchburg Foundry while his mother was a homemaker. His parents’ names have not been revealed.

He is the youngest of his five siblings.

Thomas has been married to his love, Allison Thomas since 1998. They met at their college since they were classmates.

He has been blessed with a son named Nathaniel Charles Thomas, who was diagnosed with Autism in his childhood but he’s a stableman at the moment.

He is the Chief Justice Correspondent for ABC News. He joined the network in November 2000 and reports for “World News Tonight with David Muir,” “Good Morning America,” “Nightline,” “This Week with George Stephanopoulos” and all platforms including ABC News Radio and digital.
In 2011, was the focus of an hour-long C-SPAN broadcast about his career and thoughts on journalism. In 2012, he was named Journalist of the Year by the National Association of Black Journalists.
He is a former Washington Post reporter and was part of a team whose work was a finalist for the Pulitzer Prize for reporting on illegal gun use in the Washington, D.C., region.

In 2012, the National Association of Black Journalists named him “Journalist of the Year,” particularly citing his accomplishments in accurately reporting the shooting of U.S. Representative Gabrielle Giffords (while other networks erroneously reported she had died) as well as breaking stories around the death of Osama bin Laden.

In 2015, he  won the Radio Television Digital News Association’s John F. Hogan Distinguished Service award for “contributions to journalism and freedom of the press.

He received the Pass Award from the National Council on Crime and Delinquency for his article “Beyond Grief and Fear,” twice won the Mort Mentz Investigative Award and was a finalist for the Livingston Young Journalist Award.

He earns an annual salary of over $98,000 from his job as the Chief Justice Correspondent in ABC News.

His accurate net worth remains undisclosed.