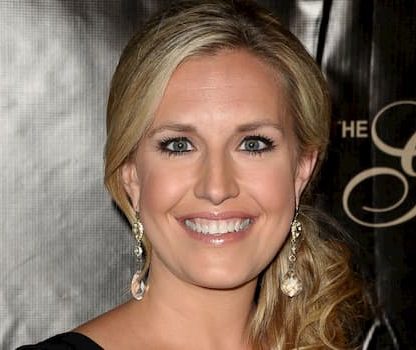 Poppy Harlow is an American media personality serving as the anchor of CNN Newsroom alongside Jim Sciutto. She also hosts CNN podcast “BossFiles with Poppy Harlow.” She previously served as a business correspondent at CNN, CNN International and HLN and an anchor for CNNMoney.com.

Her real name is Katherine Julia Harlow; the name Poppy is a nickname used by her mother but it ended up sticking.

She was a member of Phi Beta Kappa.

She is the daughter of James Lee Harlow and Mary Louise Bard. Her father was an attorney but he died when she was 15 years old.

Harlow is married to Sinisa Babcic since 2012. Sinisa is an investment banker working for Ernst & Young LLP serving as a senior manager in the firm’s Advisory Services Practice. He graduated from the University of Illinois’ Urbana-Champaign College of Business in 2004 with a degree in Business Finance.

She has two children; a daughter known as Sienna born in April 2016 and a son known as Luca James born in February 2018.

Harlow joined CNN in 2008 and serves as an anchor for “CNN Newsroom” weekdays from 9-11 am ET alalongside Jim Sciutto. She previously served as a business correspondent at CNN, CNN International and HLN and an anchor for CNNMoney.com She is also the creator and host of the CNN podcast “BossFiles with Poppy Harlow.”

She also reports from the field during breaking news. In 2015 she covered the Paris terror attacks and anchored from the ground there for two weeks focusing her coverage on the personal stories of the victims and their families.

She also anchored extensive coverage of the Boston Marathon bombings and for years following the attacks she reported on the recovery and resilience of several women who lost limbs in the bombing.

Her reporting has resulted in nomination for multiple Emmy awards and has won numerous industry awards, including the Gracie Award for Best online investigative feature on financial fraud, and SABEW’s Best in Business award for online video.

Poppy began her career in journalism as an intern at CBS. After graduating she continued working with the network, working for MarketWatch and as an assistant for CBS Newspath. She later joined NY1 News.

In 2007 she joined Forbes. com Video Network, where she covered news on several topics, including business, fashion and entertainment.

Poppy hosts a CNN podcast “Boss Files with Poppy Harlow’ where she explores the journeys of business and global leaders. In-depth interviews with leadership advice from entrepreneurs, CEOs and innovators about what it takes to rise to the top.

Her annual salary is $2 million.

@metmuseum with 2 kids — how do we think this is going to go? #DontTouchAnything 🖼 @joan_didion ❤️