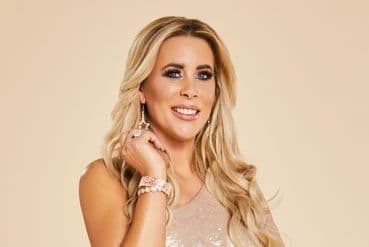 Rachel Lugo is an English businesswoman and a television personality best known for her role as a cast member of the ITVs program The Real Housewives of Cheshire (RHOC) since season six.

Racheal has two sisters, an older sister known as Nicola and a twin sister known as Katie Kane. Her twin sister Katie battled skin cancer and her journey was highlighted on The Real Housewives of Chesire which Rachel revealed was a way to raise awareness. She previously had it on her chest and after several treatments, it went to the face.

“Everyone gets to see how she is feeling and how she looks, she’s amazing. It was really important for both of us to share it – when you have something so real and it impacts so many people, and you can raise awareness, it has got to be brought to a reality show because it is not all about dining out and arguments.

Katie has highlighted something and the number of messages and hand written letters I have received has left me astounded. For example, from people who have had a mark and got it checked and turned out it was the same as Katie and the outpouring of emotion from people saying if they hadn’t watched it they wouldn’t know, my goodness me, it has been remarkable. That’s the reason we wanted to bring it to the show and Katie was brave in doing that, she is just amazing.”

Sorry, not sorry! Ask yourself if a tan is really worth it? I don’t want to lecture anyone but I never thought this would happen to me…I want people to recognise the signs of skin cancer so it can be caught early. I was extremely lucky and had the best possible outcome, time to celebrate 💃 If in doubt check it out #skincancer #mohssurgery #listerhospital #surgery #allclear #skincancerawareness #britishskinfoundation #sunsafety #raisingawareness

Rachel was married to John Lugo from March 2000 but they divorced in 2019. The couple began dating when Rachel was 20 years old and had their first child at the age of 22. Her mother passed away after a battle with cancer.

She has five children together with her ex-husband; daughters Francesca, Sophia and Siena; and sons William and Oliver.

Rachel’s daughter, Francesca suffers from Crohn’s disease.  She uploaded a photo of Francesca on her Instagram page with the caption; “It’s horrible as a mother to see you in so much pain when your Crohn’s flares up, yet you always try and put a smile on your face. You are acing your uni exams even though you watch most of your lectures online as you are often too poorly to attend. Your determination and persistence inspires me and I am so so proud of you Princess. Keep smiling beautiful girl ❤️❤️ I love you ❤️.”

My princess @francescalugo always smiling ❤️❤️ . This was only taken a few days ago before she got poorly. Her hospital room doesn’t look this glam 🙈 Thank you so much for all your messages and advice about Francesca’s Crohn’s. I’ve read all of your messages and they have been very informative. Francesca’s flare ups seem to be linked to stress. When she worries about things she gets very anxious and then unfortunately her symptoms recur. Its horrible to see her in so much pain and I feel completely helpless but the more I learn and understand about her condition hopefully we will be able to control it better ❤️❤️

Rachel together with her husband runs Gatley Green, a construction and property management company. They have successfully managed residential properties for over 20 years, branching out into building and renovating approximately 11 years ago.

Rachel joined the ITV series The Real Housewives of Chesire 2017, she has been a cast member since season 6.

In December 2019 Rachel revealed she had lost 16lbs in four months. “I’ve lost 16lbs in the last four months. It’s very easy when you are feeling low due to changes in your life to comfort eat and I found myself doing just that!”

She said that she was inspired to lose weight after she saw a photo of herself in the media.

“It was only after seeing a photo of myself in the press where I looked larger than normal and realising my jeans would no longer even go over my thighs I decided to pull myself together and sort myself out.

I cut out sugar and snacks and I’ve gone from never going to the gym to now working out four times a week and I use a protein shake after my workouts.

Being single and deciding I was ready to dip my toe into the dating world definitely helped kickstart my weight loss and having the mummy makeover last year now means my tummy is flat too, which after five children is amazing as I had an awful lot of excess skin which used to hang over my jeans. I’m feeling better than ever. Onwards and upwards.”

Im always shocked when my hairdresser takes a photo of the back of my head just before my colour is done….there’s me thinking it looked ok 😂😂 Hair cut and colour as always by the absolutely amazing @thestyle_loungeae_ I wouldn’t go anywhere else … 17 years and counting 🥰🥰 Who else was up early today because of the clocks changing yesterday 🙈 Extensions @hairchoiceextensions Don’t forget episode 3 of The Real Housewives of Cheshire is on TONIGHT at 9pm @itvbe … our newest housewife makes her debut 😀 @officialrhoch @lystraadamsofficial