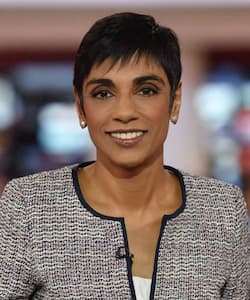 Reeta Chakrabarti is a British media personality working as a Contributing Editor and  correspondent for BBC News. She is the main relief presenter for BBC News at One, BBC News at Six, BBC News at Ten and BBC Weekend News and she presents regularly on the BBC News Channel.

Reeta was born on 12 December 1964 in Ealing, London, England

Her height is unknown

Chakrabarti attended Calcutta International School and later joined  the University of Oxford. She also graduated with a degree in English and French from Exeter College.

Reeta is the daughter of Bidhan Chakrabarti, Ruma Chakrabarti.  She was born  to an Indian Bengali family. Her father worked at a radio station and her mother was a teacher.

She was brought up alongside her sister Lolita Chakrabarti . She  is an actress and writer who has worked extensively on stage and screen and the winner of the 2012 Most Promising Playwright “Evening Standard “award,  She trained at The Royal Academy of Dramatic Art.

Reeta is married to Paul Hamilton. He is the son of Patrick Hamilton who fought as part of the Forgotten Army in Burma. The couple lives in North London and have three children together.

Chakrabarti joined BBC in 1994 as  a reporter for the Breakfast Programme on the newly launched BBC Radio 5 Live. She later became a general news correspondent working on television as well as radio. In 1997, she became the BBC Community Affairs correspondent, covering the Stephen Lawrence Inquiry and also working on Home Affairs. In 1999 Chakrabarti became the  political correspondent for the BBC, working across a range of programmes in television and radio, reporting on politics for BBC One, BBC Two, the BBC News Channel, BBC Radio 4 and BBC Radio 5 Live. In January 2011 she was the education correspondent for BBC News. In May 2014 she was appointed as news presenter on BBC One and the BBC News Channel.

Reeta has chaired and hosted numerous corporate events, including the 2003 and 2004 Educational Television Awards Dinners for the Royal Television Society. She also hosted the 2018 TV Journalism awards for the RTS. In April 2018, she acted as host for the opening of the Commonwealth Heads of Government Meeting at Buckingham Palace. She is a Contributing Editor for BBC News.