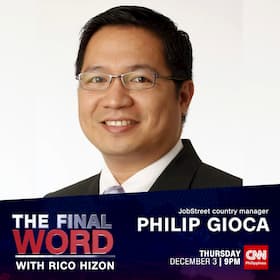 Federico M. Hizon is a Filipino media personality working as  a senior anchor and director for news content development at CNN Philippines. He also worked for  BBC World News where he anchored Newsday and Asia Business Report, He is the first-ever Filipino news anchor to work for two of the world’s most prestigious television news networks – CNBC Asia and BBC World News.

His height is unknown

Rico graduated from  De La Salle University with a degree in Communication Arts and Business.

Hizon was born and raised in Manila by his parents. In an exclusive interview, Rico said his late mother Leonor Hizon was his broadcasting influencer. “The influence of broadcasting started with my late mom.  She watched the evening news on a daily basis and was interested with developments in news and current affairs. Starting at the age of 11, I always sat with her to watch the news after school. No fail. This really got me interested in general news, business and sports. Apart from understanding the news I also got curious on how the reporters delivered the news. I would always try to mimic the way reporters did it in front of my mom and dad.

Rico is married to Melannie  Syquia-Hizon who  serves as GoodNews Pilipinas.com’s CEO and operations director and a a former international flight attendant. Melannie  shares the enthusiasm for advocacy with Rico himself and through the art-events undertaking of Melannie, Art Sentral Asia, they encourage Filipino art in Singapore. The duo met on a blind date set by their mutual friend.

Rico and his wife has a son named Migo and they reside in Singapore.

Rico joined CNN Philippines as senior anchor and director for news content development in 2020. Here he took over the  late-night newscast The Final Word, as well as anchoring CNN Philippines’s newest business show, The Exchange, which launched in July. Hizon was also part of the network’s State of the Nation Address coverage that same month – his first SONA coverage in the Philippines since 1995. He anchored a cumulative 7 hours that day – starting with the network’s 2pm coverage where he joined Chief Correspondent and Anchor Pia Hontiveros and Senior Anchor and Correspondent Pinky Webb until the President’s speech ended and for a post-SONA analysis with ADR Stratbase analyst Dindo Manhit and former Presidential Spokesperson Edwin Lacierda.

CNN Philippines launched a new business program The Exchange hosted by Rico  as the network is currently beefing up its programming line-up in the ‘’new normal’’
Bringing big business news in the week from local to international and interviews with business leaders and newsmakers. The program started to air in July 17 with Hizon’s guest for the pilot episode include National Economic and Development Authority acting Director-General Karl Kendrick Chua, Albay 1st District representative and economist Joey Salceda and San Miguel Corporation President and Chief Operating Officer (COO) Ramon Ang. It was supposed to start airing in July 11 but delayed by a week after the network decided to sign-off for few days for disinfection of its office and studio due to one of its utility staff tested positive for coronavirus disease 2019 (COVID-19).

Hizon joined BBC World News in 2002, and anchored the daily business and finance programme Asia Business Report and Asia Today live from Singapore Monday to Friday.  He is also hosted  NewsDay, broadcasting live to audiences in Singapore and London every weekday morning.

Hizon also  hosted  several top global events — the Clinton Global Initiatives in Hong Kong (2009) and New York (2010); The Surrey Economic Summit in Vancouver, Canada (2010); The Hitachi Young Leaders Initiatives in Singapore (2010) and Hanoi, Vietnam (2012); the Frost and Sullivan ICT Awards in Singapore and Malaysia (2006-2012); the Business Traveler Asia-Pacific Awards in Hong Kong (2001-2012); and the British Chamber of Commerce Awards in Singapore (2004-2005). Hizon was honored as a guest speaker at the British Chamber of Commerce in the Philippines in 2011. .In March 2020, Hizon formally announced via his Instagram account that he would be leaving BBC News after 17 years.

Hizon also worked at  CNBC Asia  based in Hong Kong and later in Singapore, where he was the main anchor of the morning edition of CNBC Today, Squawk Box, Market Watch and Power Lunch.

Rico is a multi-awarded media personality. In 2012 he garnered the prestigious Rotary Club of Manila Broadcast Journalist of the Year Award. In 2011 he was chosen as one of Asia’s top news anchor’s at the Asian Television Awards. In 2010, People Asia Magazine name Rico as one of the People of the Year. In 2009 he was awarded the La Sallian Achievement Award for Global Journalism. In 2008, he earned the Presidential Award for excellence in International Journalism and was recognized by the Bank of the Philippine Islands for bringing honor and recognition to the Philippines with the BPinoy Award. In 2006 he was awarded The Outstanding Young Men (TOYM) Award for International Journalism and Community Service.

His salary is unknown

Hizon has an estimated net worth of $1million-$5million