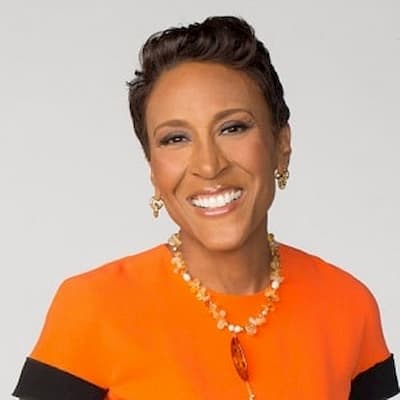 Robin was born on 23 November 1960 in Tuskegee, Alabama, United States.

She belongs to the African-American ethnicity.

She is the daughter of Lucimarian Roberts and Colonel Lawrence E. Roberts. Her mother graduated in 1946 from Howard University, where she met her future husband, Lawrence Roberts. She served as director of the Federal Reserve Bank of Atlanta, New Orleans Branch, chair of the Mississippi Department of Education, and was a board member for the Boys and Girls Club of the Mississippi Gulf Coast. . In 2011 Mrs. Roberts received the Medgar W. Evers Lifetime Achievement Award from the Gulfport branch of the NAACP. She collaborated with daughter Robin Roberts and author Missy Buchanan to pen My Story, My Song: Mother-Daughter Reflections on Life and Faith (Upper Room Books, April 2012). She passed on on August 30, 2012, after suffering a stroke in July.

Her father was a pilot and he attended Howard University, received his bachelor’s from Morningside College, and received his master’s degree from the Tuskegee Institute. He flew Piper Cubs, North American B-25 Mitchell bombers, Douglas C-54 Skymaster transports, and North American F-86 Sabre and fighter jets. He also served as an instructor in Tuskegee University’s Air Force ROTC program and served in the Vietnam War.He received 18 service medals and awards and was one of the founding members of the Keesler Air Force Base Gospel Service, the oldest Gospel service in the United States Air Force. On October 12, 2004, Roberts died at his home in Biloxi, Mississippi, at the age of 81 of a heart attack and was buried with full military honors.

She was brought up alongside her three siblings, Lawrence E. Roberts II, Sally-Ann Roberts and Dorothy Roberts McEwen Ricketts. Sally was a renowned journalist who worked for 40 years in news television before retiring in 2018. Lawrence is a high school English teacher who after studying for many years and graduating from college in business, he decided to go back to school and pursue a career to become a teacher. Dorothy is a social worker and director of the South Mississippi Regional Center.

Robin revealed in 2013 that she was a lesbian and has been in a relationship with her partner Amber Raign, a licensed massage therapist and the co-founder of the CBD and essential oils brand Plant Juice Oils. Apart from posting about each other from time to time, the couple will occasionally make joint appearances at various media events or even on GMA. According to an Instagram post which Robin regrammed from Amber, it’s revealed how the couple first crossed paths back in 2005. According to the post, Amber met Robin for drinks on a blind date that both had hilariously tried to cancel twice. Once they finally did meet up though, there was an instant connection. During their 15th anniversary, they shared love messages,

“Having you by my side is a gift as we continue to navigate this thing called life. I drive you crazy …. I know which is why I love you even more to this day,” Amber’s Instagram post read. In reply, Robin wrote back,”Beautiful…..absolutely beautiful. I love you with all my heart…..boo boo 😉 ❤😘😍❣~ Happy 15th Anniversary!!.

Roberts spent her childhood practicing athletic and academic success and also used to play basketball and tennis during her early years. In January 14, 2007, during the edition of Costas on the Radio, she revealed that she was offered a scholarship to play basketball at Louisiana State University but thought the school was too big and impersonal after visiting the campus. On her way back to Pass Christian from that visit, she saw a road sign for Southeastern Louisiana University, stopped to visit and decided to enroll. The only scholarship left was a tennis scholarship, and she was promised that there would be a journalism scholarship by the time she would graduate. She went on to become a standout performer on the women’s basketball team, ending her career as the school’s third all-time leading scorer (1,446 points) and rebounder (1,034). Roberts is one of only three Lady Lions to score 1,000 career points and grab 1,000 career rebounds. During her senior season, she averaged a career-high 27.6 points per game. On February 5, 2011, Southeastern hosted a ceremony to retire Roberts’s jersey, number 21.

In 2007, Roberts was diagnosed with an early form of breast cancer. She underwent surgery on August 3, and by January 2008 had completed eight chemotherapy treatments, followed by six weeks of radiation treatment. In 2012, she was diagnosed with myelodysplastic syndrome (MDS), a disease of the bone marrow. Be the Match Registry, a nonprofit organization run by the National Marrow Donor Program, experienced an 1,800 percent spike in donors the day Roberts went public with her illness. She took a leave from GMA to get a bone marrow transplant and went home in October 2012. She returned to GMA on February 20, 2013 and received a 2012 Peabody Award for the program. The Peabody citation credits her for “allowing her network to document and build a public service campaign around her battle with rare disease” and “inspiring hundreds of potential bone marrow donors to register and heighten awareness of the need for even more donors.

Robin began to work for ABC News as a featured reporter for Good Morning America in June 1995. She worked at both ESPN and Good Morning America, contributing to both programs. During that time, she served primarily as the news anchor at GMA. In 2005, Roberts was promoted to co-anchor of Good Morning America. In December 2009, she was joined by George Stephanopoulos as co-anchor of GMA after Diane Sawyer left to anchor ABC World News. Under their partnership, they led Good Morning America back to the top of the ratings; the program became the number-one morning show again in April 2012, beating NBC’s Today, which had held the top spot for the previous 16 years.

In the fall of 2005, Robin anchored a series of emotional reports from the Mississippi Gulf Coast after it was devastated by Hurricane Katrina; her hometown of Pass Christian was especially hard hit, with her old high school reduced to rubble. On February 22, 2009, she hosted the Academy Awards preshow for ABC, and did so again in 2011. Prior to joining ABC, she previously worked  at ESPN where she hosted the news program, Sportscenter and also served as a sports anchor and reporter for WDAM-TV in Hattiesburg, Mississippi before moving to WLOX-TV in Biloxi, Mississippi. She was also a sports anchor and reporter for WSMV-TV in Nashville, Tennessee and was also a sports anchor and reporter at WAGA-TV in Atlanta, Georgia, from 1988 to 1990. She was also a radio host for radio station V-103 while in Atlanta.

Robin has received numerous awards and nominations including Peabody Award for her program GMA in 2012. She was also honored by the 2013 ESPYs in July 2013 and was awarded Arthur Ashe Courage Award by basketball star LeBron James. Another of her achievement is 2018 Radio Television Digital News Foundation’s Lifetime Achievement Award. She has also been selected as a mentor for Disney’s ‘DreamBigPrincess’. In 2015, Roberts was named an honorary Harlem Globetrotter, the tenth person to be given this award.

She earns an annual salary of $18 million.

She has an estimated net worth of $35 million.