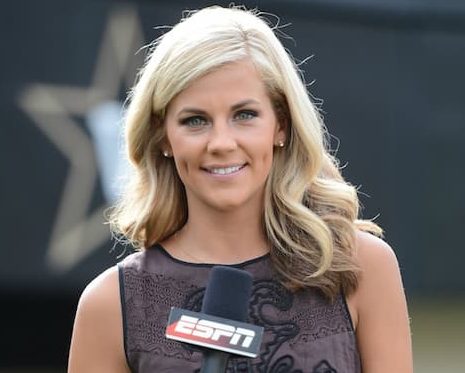 Samantha Ponder (born; Samantha Saint-Claire Steele) is an American sportscaster serving as the host of Sunday NFL Countdown on ESPN. She previously worked as a reporter/host for ESPN college football and as a basketball sideline reporter.

Samantha attended Central High School and later joined The King’s College in NYC but later transferred to Liberty University in Lynchburg, Virginia, where she worked as a sideline reporter during Liberty’s football, men’s basketball and women’s basketball television broadcasts.

Sam is the daughter of Jerry Steele and Cindi Steele. Her father is a former professional player and a retired coach. She has two siblings; brothers named Barron and Jerrod Jefferson.

Samantha got married to Christian Ponder in December 2012. The couple began dating after Ponder messaged her on Twitter and just after two months they decided to get married.

Ponder and her husband has three children together; two daughters, Bowden Saint-Claire Ponder born in 2014 and Price born in July 2018 and a son Robinson True born in 2017.

Their daughter is named after Christian’s college football coach at Florida State, Bobby Bowden while their son was named “after Jackie and David (Robinson)… two men of courage who weren’t/aren’t afraid to hold to their convictions and take the road less traveled.”

Sam serves as the host of Sunday NFL Countdown on ESPN since March 2017. She is the third person to occupy the position in the 32-year history of ESPN’s Sunday morning NFL pregame show. She also contributes to NFL interviews and features. She joined ESPN in 2011 and also worked as a reporter for college football (Thursdays), as well as Longhorn Network events, studio shows and feature stories out of the LHN studios in Austin, Texas. Additionally, she served as a reporter for ESPN’s Tuesday and Saturday primetime college basketball games.

She is a former contributor to College Football Live and College GameDay Built by The Home Depot (2012-16). In 2016 she also served as a reporter for ABC Saturday Night Football telecast with Chris Fowler and Kirk Herbstreit.

She began her career while still in college at Liberty University in Lynchburg, Va. where she served as the sideline reporter and host for all football and men’s and women’s basketball games. She later joined ABC Sports Radio as an intern and assisted with research on ABC Television’s College Football Studio show in New York.

Ponder was a host and reporter for Fox Sports, prior to joining ESPN, where she contributed to both Fox Sports Net and Fox College’s coverage of college basketball and football in the Pac 10 and Big 12 conferences.

During her tenure, she led the pregame, halftime and postgame studio shows for various events, including the Pac 10 Basketball Tournament and “Paradise Jam,” a preseason tournament in the U.S. Virgin Islands featuring teams from the ACC, Big East, and other various conferences.

She also joined radio shows around the country during the college football and basketball seasons to discuss the latest news in college sports, and was a weekly columnist for FoxSports.com.

She earns an annual salary of $4.9 million.

She has an estimated net worth of $12.2 million.

In October 2017 after ESPN announced that they were forming a partnership with Barstool Sports to host a late-night talk show — “Barstool Van Talk” Sam tweeted;

Welcome to the ESPN family @BarstoolBigCat (& welcome to all ur minions who will respond to this so kindly) pic.twitter.com/AzgfdDx2FK

In a subsequent exchange Ponder also referenced a 2014 show in which Ponder claimed members of Barstool called her a “slut.” The clip began recirculating on social media.

Below is a portion of the transcript, spoken by Dave Portnoy:

“I know for a fact that every day at ESPN, all the suits and all the lawyers, they have their annual – not annual, daily – their daily 9:15 coffee meeting on how can we fire Sam Ponder without being sued for like discrimination. Because she is the worst. No person watching GameDay wants to see a picture of her and her ugly kid. Nobody cares Sam Ponder. We want to see you sex it up and be slutty and not see some prude [expletive] jerk who everybody hates and who’s married to the worst quarterback who wears the ring and “God first” and this and that. Shut up. That’s not what you’re there for. And ESPN just can’t find out how to fire you. Because they hate you. Because everyone who watches you hates you. Because all you do is talk about your little rat kid that nobody wants to hear about.”

In October 2020 Sam allegedly confronted Dave Portnoy outside of a NYC restaurantand was in company of Colt McCoy. Dave spoke about the incidence on his podcast, Dave Portnoy Show Podcast (episode 4).

“It was Tuesday night. Went out to dinner. I was out on a date. Went out to Catch, it’s a restaurant in New York across the street, have dinner. I’m walking out of the restaurant and a girl is like hanging out on the side of the bar by herself. She’s like “do you recognize me?” and I’m looking at her and I’m like “No”… and I didn’t… I’m like oh my god, what’s going on here. She was wearing a hat, she takes it off. She’s like “what about now?” I’m like “still no” and like no clue who this girl is. And I’m like usually not mean to girls. I could tell it wasn’t like a “hey remember me lets hug it out” She was like saying it with anger. Then she’s like “you don’t recall like saying that I’m a slut?”