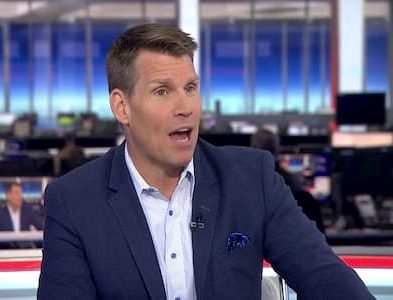 Scott Hanson is an American television anchor and reporter serving as host of NFL RedZone. He also serves as a host for NFL Network’s on-location coverage of such events as the Super Bowl, NFL Scouting Combine, NFL Draft, free agency among others. He joined NFL Media in 2006 and in 2008 he transitioned to studio hosting before becoming the host of NFL RedZone in 2009.

Scott stands at a height of 6 feet 1 inch tall

Scott has not revealed much about his family but he shares photos of his mother on his social media accounts. He has two siblings, a sister and a brother.

When your best girl comes to visit. ❤️ u Mom! (She told me when I was a little boy I’d use a fork or a spoon as a “microphone” at the dinner table.)

Scott has one brother although his name is unknown.

There is no available public information regarding Scott’s marital status.

Scott Hanson is not related to Chris Hansen who is on Dateline NBC, in particular, the former segment To Catch a Predator, which revolved around catching potential Internet sex predators using a sting operation.

RT @420specialists are u related to Chris Hanson from dateline NBC? I need to know this. << u need Google. & spell check. Chris Hansen

Scott had a football career that lasted through college. While studying at Bishop Foley Catholic High School he was an all-conference player who was named the team captain for his senior season. He received a few offers to play football in college, but he chose to attend Syracuse University and try out for the team instead.

He made the Syracuse team in 1989 as a long snapper and also served as a wide receiver and defensive back on the scout team.

Hanson began his career as an anchor and reporter in 1993 as a sportscaster with WPBN-TV in Traverse City, Michigan, which is an affiliate of NBC. In 1994 he moved to Springfield, Illinois, as a reporter for WICS-TV. He later headed south to ABC affiliate WFTS-TV in Tampa, Florida, where he covered the Tampa Bay Buccaneers rise under coach Tony Dungy.

Scott joined NFL Network in 2006 where he serves as a reporter, anchor, and host. In 2009 he became the National Correspondent and host of NFL Network’s show, NFL RedZone. On Sundays he presents NFL coverage live, and on Mondays hosts Up to the Minute looking at NFL games from the previous week along with a preview of the Monday Night Football matchup. He also co-anchors NFL Total Access during the week.

Hanson has an estimated net worth of $3 million.

Mood. Who’s with me?? #NFLRedZone