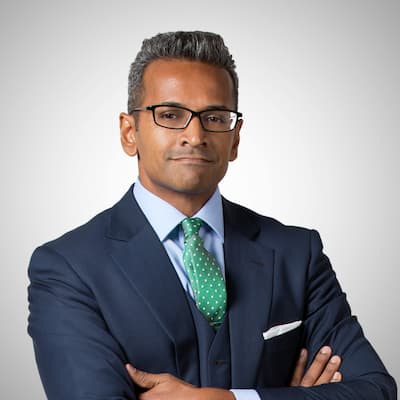 Sri Jegarajah is an American media personality working for CNBC as a business and financial markets correspondent co-presenting and contributing to the network’s flagship breakfast show “Squawk Box” Asia. He previously served as an energy reporter for Dow Jones Newswires and served as a business correspondent at Bloomberg News in Singapore.

His age and place of birth are not available.

Jegarajah graduated from University of Warwick with a Bachelor’s degree in English and theatre studies.

Sri is the son of Sanmugam Jegarajah and Indrany Jegarajah. His father was a consultant physician in general and respiratory medicine in Rochdale. He worked in Birch Hill Hospital in Rochdale, a teaching hospital in Sierra Leone and Kilinochchi General in northern Sri Lanka. He was educated at St Joseph’s College, Colombo and then studied medicine in Colombo, qualifying in 1964. He also gained his diploma in tuberculosis and chest diseases from Cardiff in 1970 and his MRCP in 1971He served as a senior house officer on the professorial medical unit, City Hospital, Nottingham and a registrar in general medicine at Central Middlesex Hospital, London. He then became a rotating senior registrar at Addenbrooke’s Hospital, Cambridge. He married his wife in 1967. He passed away in 2018.

He was brought up alongside his sister but not much is known about her.

“My Missus bought me a bouquet of edible flowers to mark my tenth anniversary at CNBC!” And on December 24, he tweeted, “On a lighter festive note, here’s my wife’s choice of wrapping paper. ‘Cheeky’ Christmas spirit ⁦
@DeepaBalji” Not much is known about his wife and when and where the two exchanged their marriage vows.

No details regarding his children is available.

Sri  joined CNBC in 2005 and currently serves as a Singapore-based anchor, regional correspondent and co-anchor of CNBC Asia’s flagship morning show ‘Squawk Box’. Sri has reported on major global events including the 2016 Jakarta attacks, 2008 financial crisis, the Indian Ocean tsunami and the aftermath of the 2011 tsunami disaster from Tokyo.

He also worked as a Business Correspondent for Dow Jones Newswires where she reported on the U.K. agriculture industry including farm policy at home and in the European Union. From 2000-2002 , she transferred to Dow Jones’ Singapore bureau in 2000 to report on regional oil markets and reported on live updates on breaking news in the oil market and market reports for CNBC TV in Asia and Europe.

He twice received the Bronze Medal in 2009 and 2013 for Best News Correspondent by the New York Festivals International TV & Films Awards.

His average annual salary is unknown.