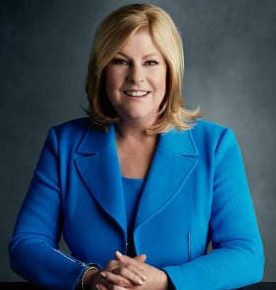 Susan McMahon Herera is an American media personality serving as a Breaking News Anchor for CNBC providing regular news updates throughout CNBC’s Business Day programming in addition to serving as the network’s lead anchor for breaking news stories. She previously served as an anchor and reporter with Financial News Network and as an intern at the KNXT TV station in Los Angeles (now KCBS-TV).

Sue was born on15 November 1957 in Spokane, Washington, United States.

Susan was born in Spokane, Washington but grew up in Brentwood, California where her father was a shoe wholesaler and her mother was a housewife. She hasn’t revealed any further information regarding her parents and it’s also not known if she has any siblings.

Sue is married to Daniel Herera, a Physical Medicine & Rehabilitation Specialist in Englewood, NJ and has over 22 years of experience in the medical field. He graduated from St George’S University School Of Med St George’S Grenada medical school in 1999. He then completed a residency at Ny And Presby Hospital and currently practices at Spine Center & Orthopedic Rehabilitation of Englewood. The couple met each other on the assignment in Los Angeles and got married in 1984.

Sue and her husband have three kids together, twin daughters Victoria and Jacqueline and a son named Daniel.  The couple had adopted the twin girls from a village in China in 2002, and  two years later, she became pregnant and gave birth to a son in 2005.

Sue serves as the Breaking News Anchor for CNBC providing regular news updates throughout CNBC’s Business Day programming in addition to serving as the network’s lead anchor for breaking news stories. She previously  anchored and co-anchored CNBC shows Market Wrap, Business Tonight, The Edge, The Money Wheel, Business Center, and Power Lunch. In 2015, Herera became the anchor for the Nightly Business Report TV show and was joined in 2018 by co-anchor Bill Griffeth, who had previously worked with her on Power Lunch. The Nightly Business Report show made its final broadcast in December 2019.

Herera was one of the first women to break into the world of broadcast business news, earning her the nickname “The First Lady of Wall Street.” In her 25-plus years of covering Wall Street. She has provided viewers with a seasoned perspective on the major stories and issues moving the markets and groundbreaking interviews with leaders in politics and corporate America.

She is a founding member of CNBC, helping to launch the network in 1989. Well-versed in the world of global economics, Herera has covered several of the major geopolitical summits held overseas. She has traveled to China and Japan to report on and produce groundbreaking series about the economies of those countries. In 2004, she was host and anchor of CNBC’s special international series “CNBC in Russia,” which took an in-depth look into Russia’s economy and leadership, contrasting the country’s successes with its problems. She won the first-place prize in the National Headliner Awards for the special. She also hosted “CNBC in India, “which took top honors in the Business & Consumer Reporting category.

Prior to joining CNBC, Herera spent seven years as an anchor and reporter with Financial News Network, honing her expertise in the areas of foreign exchange and futures trading. She was also an intern at the KNXT TV station in Los Angeles (now KCBS-TV).

Herera is the author of “Women of the Street: Making It on Wall Street—The World’s Toughest Business.” She featured 14 successful women investment professionals.