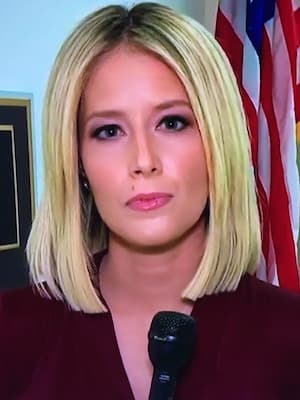 Sunlen Mari Miller is an American media personality serving as a Washington correspondent with CNN based in Washington, D.C. She previously worked as a White House and U.S. Senate reporter for ABC News and served as a  local general assignment reporter on the weekends for WJLA as well as an associate producer of television and radio projects for The Washington Post.

Serfaty is the daughter of Denise M. Miller and William N. Miller. Her father is an independent commercial arbitrator and mediator while her mother is a marketing communications manager in Richmond, Va., with a power generation services unit of Alstom, the French transport and power equipment company.

No information on whether she has any siblings is available.

Sunlen is married to Alexis Leigh Serfaty, a policy adviser in the office of the secretary at the Department of Transportation in Washington. He graduated from the College of William and Mary and received a master’s in political science from the Paris Institute of Political Studies. He is the son of Gail F. Serfaty and Simon H. Serfaty of Washington. His mother retired as the director overseeing the operations of the diplomatic reception rooms at the State Department in Washington, and as the curator of the Blair House residence while his father is a senior professor of United States foreign policy at Old Dominion University in Norfolk, Va. and also holds the Zbigniew Brzezinski Emeritus Chair in Global Security and Geopolitics at the Center for Strategic and International Studies in Washington.

Sunlen and Alexis first met in 2006 and exchanged their marriage vows in 2013 at Rose Park in Washington, the same place where they first met in a ceremony officiated by Emily Guthrie, an Episcopal priest.

Serfaty and her husband welcome a baby girl in 2017 named Roosevelt Jolie Serfaty. Her name means “rose field,” the couple’s very favorite spot, Rose Park, a small green patch connecting East Georgetown and Dupont Circle. That’s been the site of their relationship’s milestones, from their first meeting to their engagement to their exchange of vows in 2013.

Serfaty is a Washington correspondent with CNN based in Washington, D.C. covering Washington at large. Under her portfolio are a broad diversity of national news, breaking news, and Washington politics. She previously worked as a congressional correspondent covering Capitol Hill for the network, as well as extensively covered the 2016 presidential election. She also served as the general assignment team for CNN in Washington, D.C. and also worked for CNN Newsource in the network’s Washington bureau contributing news coverage for its more than 800 affiliates.

Prior to joining CNN, Serfaty worked as a White House and U.S. Senate reporter for ABC News and covered President Obama’s 2008 presidential campaign. Her work was featured on the network’s overnight show World News Now, as well as on the network’s news website. In partnership with the ABC affiliate in Washington, D.C., WJLA, Serfaty also served as a local general assignment reporter on the weekends, covering breaking news stories, as well as feature stories for the ABC News affiliate in the top ten markets of the Washington, D.C.-metro area. She also worked as an associate producer of television and radio projects for The Washington Post from May 2003 to September 2004.

She won an Emmy award for her coverage of President Barack Obama’s 2008 campaign.