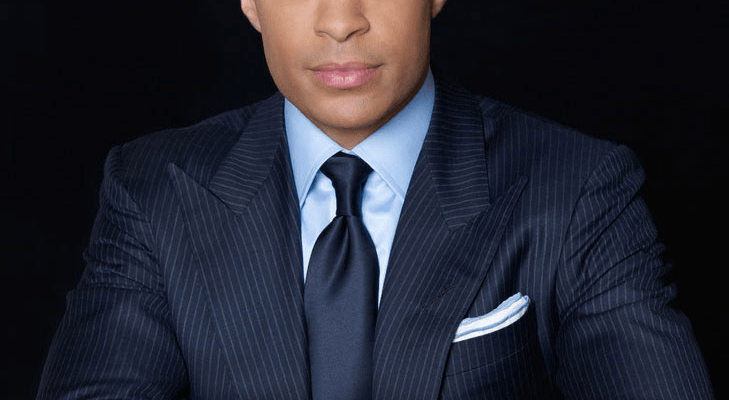 T.J. Holmes is a media personality serving as an ABC News anchor. He co-anchors GMA3 and also reports for “Good Morning America” and across ABC News platforms.

T.J. is an American national.

He belongs to African-American ancestry. He is a member of the 100 Black Men of Atlanta and the National Association of Black Journalists. In 2011 he was named to The Root 100 List of Most Influential Black Americans.

Holmes graduated from the University of Arkansas with a bachelor’s degree in broadcast journalism. He currently serves as a member of the Chancellor’s Board of Advisors at the university.

T.J. has not revealed the name of his parents but he has revealed they were both teachers. His mother is a retired elementary school teacher while his father was his high school principal.

Holmes is married to Marilee Fiebig since March 1, 2010 in Memphis, Tennessee. She is an Atlanta based immigration lawyer and also serves as vice president of operations and general counsel of Wilhelmina International Inc.

She is of African heritage as she was born in the Democratic Republic of the Congo. She moved to the U.S. with her family as a 5-year-old. She is the daughter of William and Pauline Fiebig, the former a Peace Corps volunteer and the latter an African immigrant. She graduated from the University of Michigan with an undergraduate degree in French and political science and a law degree from Vanderbilt University.

T.J. was previously married to Amy Ferson but they divorced in 2007.

Holmes is a father of three, two children a daughter Brianna and a son Jaiden from his first marriage and a daughter Sabine Holmes from his second marriage to Marilee Fiebig.

Holmes serves as the co-anchor of ABC News’ “GMA3: What You Need to Know” and also hosts the “Tell T.J.” series for “GMA” which spotlights viewers who go above and beyond in their communities.

In 2003 he joined KNTV, the NBC O&O station in the San Francisco Bay Area, as an evening news anchor. During his tenure he covered the 2004 Olympics, the first Summer Games held after the September 11th attacks. He also covered the historic recall election of California Governor Gray Davis that resulted in the election of Governor Arnold Schwarzenegger, as well as the widely covered double murder trial of Scott Peterson.

In October 2012 he began hosting BET’s show, Don’t Sleep, which laid an inspiring foundation for thought-provoking programs for African-American interests and earned him an NAACP Image Award Nomination shortly after its premiere. Holmes delivered smart, biting social commentary on significant issues and hosted a distinguished panel of thought leaders and correspondents from various disciplines. He left the network in March 2013.

He has also served as a contributing anchor to MSNBC from 2013-2014. He appeared on Weekends with Alex Witt and News Nation with Tamron Hall.

T.J. served as a news anchor and correspondent for CNN from 2006 to 2011 where he co-anchored CNN Saturday & Sunday Morning.

During his tenure, he anchored significant news stories including Saddam Hussein’s execution in 2006, the terrorist attacks in Mumbai, India in 2008 and at Glasgow Airport in 2007. He also reported from the scene of the devastating Joplin, Missouri tornadoes, the Deepwater Horizon oil spill in New Orleans, and the tragic shootings on the Virginia Tech campus in Blackburg, Virginia.

He secured some of the first accounts from the survivors of the US Airways Flight 1549 that crash-landed in New York’s Hudson River in January 2009 and reported from the campus of the University of Mississippi during the first presidential debate between Senators John McCain and Barack Obama. Holmes also anchored from Ground Zero to commemorate the emotional 10th Anniversary of the September 11th attacks.