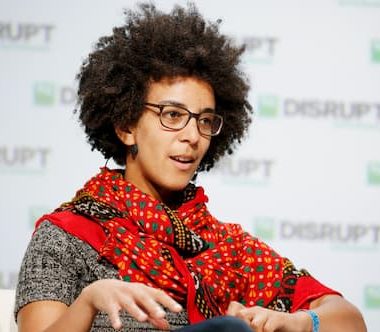 Timnit Gebru is a computer scientist who served as technical co-lead of Google’s Ethical Artificial Intelligence Team until she was fired in December 2020. She is also the cofounder of Black in AI, a community of black researchers working in artificial intelligence.

She is an Ethiopian and American national. She was born and raised in Ethiopia although her parents are both Eritrean. She escaped potential forced deportation to Eritrea by Ethiopian government in the late 1990’s and traveled to Ireland. She then immigrated to the United States to join her mother.

She studied at Stanford University, where she earned her B.S. and M.S. in electrical engineering, as well as a PhD from the Stanford Artificial Intelligence Laboratory, where she studied computer vision under Fei-Fei Li.

Timnit has not revealed the names of her parents but they are both Eritrean.  Her father was an electrical engineer who died when she was five years old.

She has two sisters who are both electrical engineers.

Timnit served as worked at Google on the ethics of Artificial Intelligence until she was fired in December 2017. She studied the implications of artificial intelligence, looking to improve the ability of technology to do social good. She collaborated with the MIT research group Gender Shades. Gebru worked with Joy Buolamwini to investigate facial recognition software; finding that black women were 35% less likely to be recognised than white men.

She has also worked on Microsoft’s Fairness, Accountability, Transparency, and Ethics in the AI team.

Gebru reportedly sent an email to her colleagues. This was after she had been working on a research paper that she hoped to publish, but ran into resistance from her superiors at Google. And so she sent a letter expressing her frustration to the internal listserv Google Brain Women and Allies.

The letter she sent to Google Brain Women and Allies detailed the struggles Gebru experienced as a Black leader working on ethics research within the company and presents a bleak view of the path forward for underrepresented minorities at the company.

Her email obtained by Casey Newton read in parts; What I want to say is stop writing your documents because it doesn’t make a difference. The DEI OKRs that we don’t know where they come from (and are never met anyways), the random discussions, the “we need more mentorship” rather than “we need to stop the toxic environments that hinder us from progressing” the constant fighting and education at your cost, they don’t matter. Because there is zero accountability. There is no incentive to hire 39% women: your life gets worse when you start advocating for underrepresented people, you start making the other leaders upset when they don’t want to give you good ratings during calibration. There is no way more documents or more conversations will achieve anything. We just had a Black research all hands with such an emotional show of exasperation. Do you know what happened since? Silencing in the most fundamental way possible.”

Jeff Dean sent out an email to Googlers on December 3, 2020 explaining why Timnit was fired. He claimed that Timnit was the one who threatened to leave Google and work on an end date. This was after her paper was not approved as it didn’t meet the bar for publication.

The email obtained by Casey Newton read in parts; “Timnit co-authored a paper with four fellow Googlers as well as some external collaborators that needed to go through our review process (as is the case with all externally submitted papers). We’ve approved dozens of papers that Timnit and/or the other Googlers have authored and then published, but as you know, papers often require changes during the internal review process (or are even deemed unsuitable for submission). Unfortunately, this particular paper was only shared with a day’s notice before its deadline — we require two weeks for this sort of review — and then instead of awaiting reviewer feedback, it was approved for submission and submitted.

A cross functional team then reviewed the paper as part of our regular process and the authors were informed that it didn’t meet our bar for publication and were given feedback about why. It ignored too much relevant research — for example, it talked about the environmental impact of large models, but disregarded subsequent research showing much greater efficiencies. Similarly, it raised concerns about bias in language models, but didn’t take into account recent research to mitigate these issues. We acknowledge that the authors were extremely disappointed with the decision that Megan and I ultimately made, especially as they’d already submitted the paper.

Timnit responded with an email requiring that a number of conditions be met in order for her to continue working at Google, including revealing the identities of every person who Megan and I had spoken to and consulted as part of the review of the paper and the exact feedback. Timnit wrote that if we didn’t meet these demands, she would leave Google and work on an end date. We accept and respect her decision to resign from Google.”

Gebru tweeted on December 3, 2020 that she was fired by Jeff Dean due to her email to Brain women and Allies.

I was fired by @JeffDean for my email to Brain women and Allies. My corp account has been cutoff. So I’ve been immediately fired 🙂

Timnit says she was fired from Google because of an email she sent to subordinates that the company said reflected “behavior that is inconsistent with the expectations of a Google manager.”

She said no one explicitly told her she was fired, but that she received an email from one of her boss’s reports, saying: “Thanks for making your conditions clear. We cannot agree to #1 and #2 as you are requesting. We respect your decision to leave Google as a result, and we are accepting your resignation.”

The email, according to Gebru, went on to say that “certain aspects of the email you sent last night to non-management employees in the brain group reflect behavior that is inconsistent with the expectations of a Google manager.”