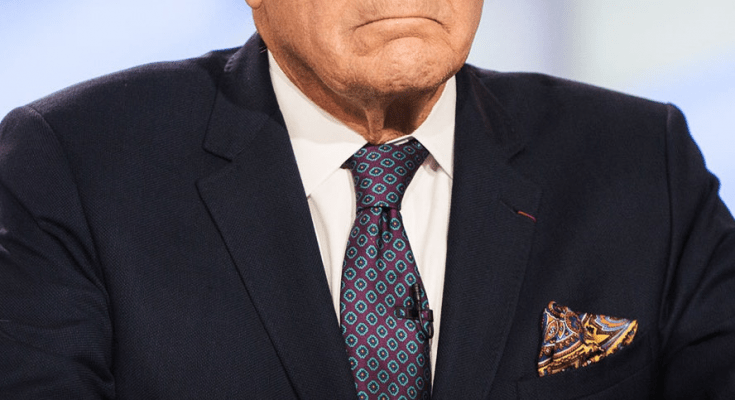 Tom Brokaw (Thomas John Brokaw) is an American television personality and author serving as a special correspondent for NBC News. He was the host of NBC News programs: The Today Show, NBC Nightly News, and, briefly, Meet the Press.

Brokaw stands at a height of 1.83m tall.

He attended Yankton Senior High School and he was governor of South Dakota American Legion Boys State. In that capacity he accompanied then-South Dakota Governor Joe Foss to New York City for a joint appearance on a TV game show.

Brokaw joined the University of Iowa in Iowa City, Iowa, but dropped out after a year as he failed to keep up in his studies, in his words majoring in “beer and co-eds”. In 2010, he was awarded an honorary doctorate from the University, and he later donated his papers to the University of Iowa Libraries. He joked that the “honorary degree is especially coveted because it helps to make up for the uneven performance of my freshman year.” He later transferred to the University of South Dakota, where he graduated Phi Beta Kappa in 1964 with a Bachelor of Arts degree in political science.

Brokaw is the son of Eugenia Conley Brokaw, who worked in sales and as a post-office clerk, and Anthony Orville “Red” Brokaw.

His father was a construction foreman for the Army Corps of Engineers. He worked at the Black Hills Ordnance Depot (BHOD) and helped construct Fort Randall Dam; his job often required the family to resettle throughout South Dakota during Brokaw’s early childhood. The Brokaws lived for short periods in Bristol, Igloo (the small residential community of the BHOD), and Picks town, before settling in Yankton.

He has two brothers, William and Michael. He is the eldest of the two and he was named after his maternal great-grandfather, Thomas Conley.

Brokaw married Meredith Lynn Auld, author in August 1962. Meredith was Miss South Dakota in 1959. He and his wife spend considerable time at their ranch near Livingston, Montana, which they bought in 1989.

On April 5, 1982, Brokaw began co-anchoring NBC Nightly News from New York with Roger Mudd in Washington. After a year, Brokaw was selected to be sole anchor of the Programme. The NBC Nightly News with Tom Brokaw commenced on September 5, 1983.

As anchor, Brokaw conducted the first one-on-one American television interviews with Soviet leader Mikhail Gorbachev and Russian President Vladimir Putin. He and Katie Couric hosted a prime-time newsmagazine, Now, that aired from 1993 to 1994 before being folded into the multi-night Dateline NBC program.

In 2002, NBC announced that Brokaw would retire as anchor of the NBC Nightly News following the 2004 Presidential election, to be succeeded by Brian Williams. He would remain with NBC News in a part-time capacity from that point onwards, serving as an analyst and anchoring and producing documentary programs. Brokaw closed his final Nightly News broadcast in front of 15.7 million viewers on NBC on December 1, 2004, by saying:

Well the time is here. We’ve been through a lot together through dark days and nights and seasons of hope and joy. Whatever the story, I had only one objective, to get it right. When I failed, it was personally painful, and there was no greater urgency than course correction. On those occasions, I was grateful for your forbearance and always mindful that your patience and attention didn’t come with a lifetime warranty.

And it is in that spirit that I say, thanks, for all that I have learned from you. That’s been my richest reward.

By the end of his time as Nightly News anchor, Brokaw was regarded as the most popular news personality in the United States. Nightly News had moved into first place in the Nielsen ratings in late 1996 and held on to the spot for the remainder of Brokaw’s tenure on the program, placing him ahead of ABC’s Peter Jennings and World News Tonight, and CBS’s Dan Rather and the CBS Evening News.

Brokaw began his television career at KTIV in Sioux City, Iowa followed by stints at KMTV in Omaha, Nebraska, and WSB-TV in Atlanta. In 1966, he joined NBC News, reporting from Los Angeles and anchoring the 11:00 pm news for KNBC. In 1973, NBC made Brokaw White House correspondent, covering the Watergate scandal, and anchor of the Saturday editions of Nightly News. He became host of NBC’s Today Show in 1976 and remained in the job until 1981.

After leaving the anchor chair, Brokaw remained at NBC as Special Correspondent, providing periodic reports for Nightly News. He served as an NBC analyst during the 2008 presidential election campaign and moderated the second presidential debate between Barack Obama and John McCain at Belmont University. He reported documentaries for the Discovery Channel and the History Channel and in 2006 delivered one of the eulogies during the state funeral of former President Gerald R. Ford.

On June 13, 2008, when NBC interrupted its regular programming to announce the sudden death of NBC News Washington Bureau Chief and Meet the Press moderator Tim Russert, Brokaw served as the announcer. A week later, NBC announced that Brokaw would serve as host of Meet the Press on an interim basis. He was succeeded by David Gregory in December 2008.

Brokaw serves on the board of directors of the Council on Foreign Relations, the Committee to Protect Journalists, the International Rescue Committee and the Mayo Clinic. He is also a member of the Howard University School of Communications Board of Visitors and a trustee of the University of South Dakota, the Norton Simon Museum, the American Museum of Natural History, and the International Rescue Committee. He also provides the voiceover for a University of Iowa advertisement that airs on television during Iowa Hawkeyes athletic events.

In 2011 Brokaw began hosting The Boys in the Hall, a baseball documentary series for Fox Sports Net.

In November 2014, President Barack Obama presented Brokaw with the Presidential Medal of Freedom, American’s highest civilian honor. He received the honor with the citation, “The chronicler of the Greatest Generation, we celebrate him as one of our nation’s greatest journalists”.

In April 2018 Brokaw was accused of sexual misconduct. Three women came forward with allegations against him. Former NBC correspondent Linda Vester and another unnamed woman said he acted inappropriately in a pair of news reports. A third woman came forward, saying Brokaw made an unwanted advance to her 50 years ago. Brokaw has vehemently denied any misconduct, and his current and former colleagues have rallied to his defense.

He was diagnosed with multiple myeloma, a treatable but incurable blood cancer, in August 2013. Through months of specialized treatment, he is in remission and he is opening up about his battle with the disease.

His exact salary is unknown as at January 2021.