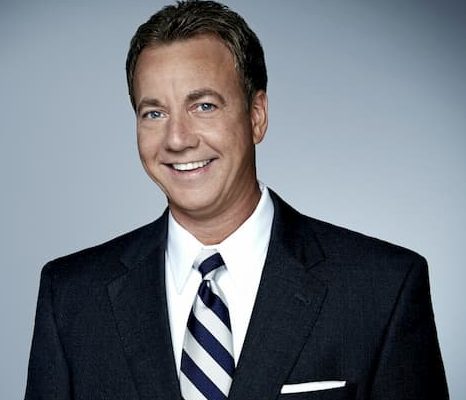 Tom Sater is a five times Emmy award-winning meteorologist serving as a weather anchor for CNN International based in Atlanta. He is a member of the National Weather Association (NWA), and has earned the Seal of Approval from the American Meteorological Society (AMS).

His actual age is unknown.

Sater is married to Gurvir Dhindsa who is a journalist serving as an anchor for the CBS46 Morning News from 4:30-7 AM Monday through Friday. She formerly worked for Fox 5 News. She was born in Punjab, India, and moved to the United States when she was seven years old.

Tom is a meteorologist and weather anchor for CNN International based in Atlanta. He has covered many international weather stories including Super Typhoon Haiyan in November 2013. While covering the landfall impact in the Philippines, he was one of the first international broadcasters to report that the storm’s intense winds made it the strongest typhoon to make landfall on any landmass in recorded history.

Sater is married to Gurvir, the two had an affair when Sater was married to Holly Morris and they all worked for Fox 5. Holly revealed about the affair in a podcast where she said Dhindsa was a little obsessed with her and even dressed like her at work and would email her under a false name.

Tom worked as a weather anchor of Fox News 5 but was later fired in July 2005 for alleged ‘gross misconduct.’ After his firing, the American Federation of Television and Radio Artists (AFTRA) released a statement saying they had investigated and concluded that gross misconduct had not occurred.

“Tom Sater was an award-winning meteorologist at Fox 5 in Washington, DC. After almost 7 years of service, management at WTTG-TV (the Fox O&O in Washington, DC) decided it was time for him to leave, even though he was very popular with the viewers, and had won 5 Emmys. Management claimed “gross misconduct” and terminated Tom’s employment without notice or severance pay. AFTRA investigated, and concluded that gross misconduct had not occurred, and demanded that the station pay Tom his notice pay and severance pay, under the terms of the AFTRA contract.

Although AFTRA and WTTG have a long history of being able to resolve their disputes, this case proved different. AFTRA filed for its first-ever arbitration with WTTG, and the two-day hearing was held in July 2006. The arbitrator found that WTTG had not met its burden of proof, and that any performance issues involved were “ordinary” and did not rise to the level of gross misconduct. As a result of the arbitrator’s ruling, AFTRA was able to recoup over $70,000 in notice and severance pay for Mr. Sater.”

In 2010 he joined Channel 9/WUSA where he did weekend freelance forecasts during the summer to cover vacationing 9ers. He previously worked at WKYT where he won a regional Emmy for Outstanding Weather Anchor as the station’s chief meteorologist. He ended up winning the same award four consecutive years during his time at WTTG in Washington, D.C.

Sater has an estimated net worth of $3 million.