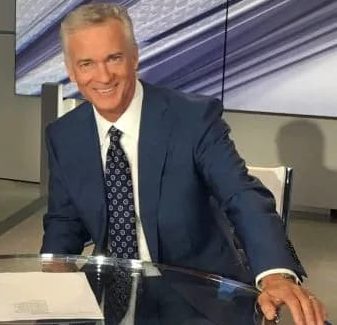 He is married to Tracy  Gallagher. On September 17, 2020 the couple celebrated their 26th marriage anniversary. Trace posted a photo themselves with the caption; “Imagine being married to this stunning woman for 26 years! I could not be more fortunate. I’d like to raise a glass to my best friend, beautiful wife, love of my life. Can I get a hear, hear?”

He is a father of two daughters; Lila and Evy Gallagher.

During his tenure, he has covered breaking news stories to hit the nation and throughout the world. He led FOX News in reporting on the college admissions scandal revealed by Operation Varsity Blues as well as contributed coverage surrounding the murder of journalist Jamal Khashoggi. He has also reported on Capitol Hill, the Washington Navy Yard shooting, the sexual harassment charges against former San Diego Mayor Bob Filner, the George Zimmerman murder trial and the birth of the Duke and Duchess of Cambridge’s first child His Royal Highness Prince George of Cambridge. Additionally, he provided breaking news coverage of the deadly crash of Asiana flight 214 at San Francisco Airport (SFO), the Boston Marathon bombing and the shootings at Newtown Elementary School and at a movie theatre in Aurora, CO in 2012.

Prior to joining Fox News, he worked as a reporter and weekend news anchor at CBS-affiliated WCPX (now WKMG).

He began his career in journalism at the NBC-affiliated KTVB-TV in Boise, Idaho. He also worked for, KVBC (now KSNV) and KYEL (now KSWT).

Trace is a rotating co-anchor of America’s Newsroom, which is an American television hard news program on Fox News Channel hosted by Sandra Smith and a rotating co-anchor. The show focuses on the development of the day’s events with interviews, current event updates, and political analysis.

In November 2020, Sandra Smith was caught on a hot mic expressing disbelief that a guest (conservative attorney Cleta Mitchell) was casting doubt on the network’s projection of a Joe Biden victory – and that the show’s host, Trace Gallagher, wasn’t pushing back.

Sandra Smith, off-air, reacts to her colleague Trace Gallagher indulging a nutjob who denies the outcome of the election even after Fox News had called it for Joe Biden: pic.twitter.com/gZ4nrnVHab

He has not revealed his political affiliation.