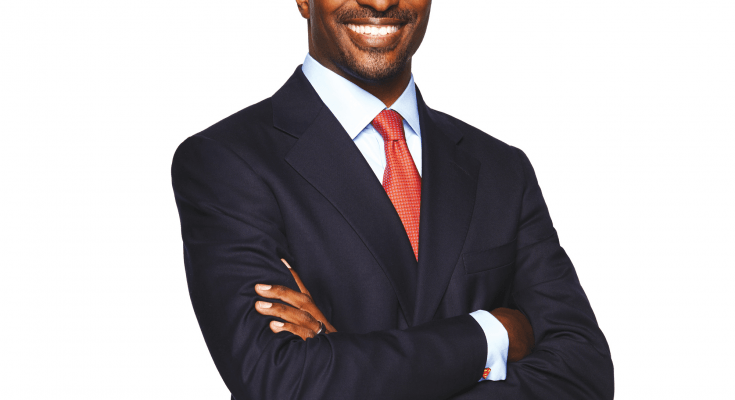 Van Jones (Anthony Kapel Jones) is an American journalist, author and lawyer serving as a host and contributor for CNN. He is also the co-founder of several non-profit organizations and a three-time New York Times bestselling author.

Jones graduated from Jackson Central-Merry High School, a public high school in his hometown, in 1986. He earned his Bachelor of Science in communication and political science from the University of Tennessee at Martin (UT Martin). During this period, Jones also worked as an intern at The Jackson Sun (Tennessee), the Shreveport Times (Louisiana), and the Associated Press (Nashville bureau).

At UT Martin, Jones helped to launch and lead a number of independent, campus-based publications. They included the Fourteenth Circle (University of Tennessee), the Periscope (Vanderbilt University), the New Alliance Project (statewide in Tennessee), and the Third Eye (Nashville’s African-American community).

He is of American nationality.

He is the son of a high school teacher, Loretta Jean and middle school principal, Willie Anthony Jones.

Jones has a twin sister, Angela.

Van and Jana Carter married in 2005 and were together for 13 years before they decided to split in 2018.

Not a lot is known about why he and Jana decided to call it quits, but the divorce seems to have been amicable. In a press statement announcing their split, the couple insisted “there is no beef or drama just evolution.”

They clarified that “though we have decided to end our marriage, we still love each other very much.”

Jana Carter is the niece of former US President, Jimmy Carter, and her parents are Billy Carter and Sybil Spires. She worked at Oakland Unified School District and few other law firms before tying the knot with Van.

At the moment Van is not in any relationship.

Van and Jana have two sons together, Mattai and Cabral, and the couple have joint legal and physical custody as they continue to co-parent the kids since they ended their marriage.

Speaking to People, Van said that, “We will continue raising our kids together, running our businesses together and supporting each other’s growth.”

Jones is a CNN political commentator, regularly appearing across the network’s programming and special political coverage. He has hosted CNN’s The Van Jones Show, The Redemption Project with Van Jones, and The Messy Truth with Van Jones.

In June 2013, he was announced as a co-host of a re-boot of the CNN political debate show Crossfire, alongside Newt Gingrich, Stephanie Cutter and S.E. Cupp. The new version of Crossfire made its debut on September 16, 2013, but the show had been canceled by October 2014.

Jones launched The Redemption Project with Van Jones in 2019, a show focused on restorative justice and bringing “offenders face to face with the people most affected by their violent crimes.”

He is also the co-creator of the Emmy Award-winning virtual reality series, The Messy Truth VR Experience.

He has been a leader in the fight for criminal justice reform for more than 25 years. He has founded and led many thriving social enterprises, including the Ella Baker Center for Human Rights, Color of Change, and the Dream Corps, a social justice accelerator that houses #YesWeCode, #GreenForAll, and #cut50, which recently led the charge to pass the FIRST STEP Act (a bipartisan Federal bill that The New York Times calls “the most substantial breakthrough in criminal justice in a generation”).

In 2009, Jones worked as the Green Jobs advisor to President Barack Obama. In this role, he helped to lead the inter-agency process that oversaw the multi-billion-dollar investment in skills training and jobs development within the environmental and green energy sectors.

He has been honored with numerous awards and spotlighted on several lists of high achievers including:

Van has been involved with Kim Kardashian’s goal of becoming a lawyer. The two of them have struck up a close friendship, but in light of the recent rumors that Kim may be divorcing her husband Kanye West, some think there may be a little more to the story.

After news of Kim and Kanye’s possible divorce started making headlines, it didn’t take long for people to claim that Kim has already started dating someone else. And, since she’s already friends with Van and Van is also newly single, people naturally leaped to the conclusion that the two of them are now together.

So far, neither party has confirmed the dating rumors, and there are many outlets reporting that it’s nothing but a hoax.

He has a net worth of around $5 million.