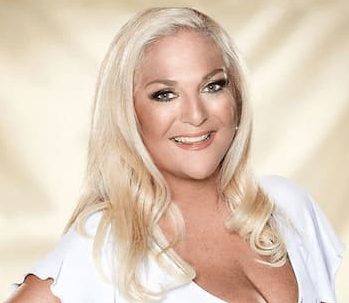 Feltz was born on 21 February 1962 in Islington, London, United Kingdom.

Vanessa is the daughter of Norman and Valerie Ohrenstein. Her mother studied history at the London School of Economics and died of cancer at the age of 57 in 1995 while her father was in the lingerie business in Bounds Green. In an interview, Feltz revealed that her parents taught her to work hard.

“My parents expected hard work, academic excellence and a constant stream of achievement every second of every day. When I was four, at my school a star badge was given out to one child every week and every week my father would say, “Have you got the star badge?” and if I hadn’t I’d have to run the gauntlet of recrimination and accusation about why I hadn’t got it. So that hard-working spirit is now ingrained in my psyche.”

Vanessa was brought up alongside her sister who is three years younger than her.

Feltz is in a relationship with her fiance Ben Ofoedu, a Nigerian-British singer-songwriter and reality TV star and the lead singer of electronic dance duo Phats & Small, known for the 1990 smash hit Turn Around (Hey What’s Wrong With You). He was born in Hong Kong and when he was two he moved to Essex with his parents and five siblings. .Ben met Vanessa through their mutual friend – Boyzone star Keith Duffy who spent some time with Vanessa in the Big Brother house in 2001. The couple has been engaged since 2006 and were due to wed in 2007 and again in 2011 but are yet to get married.

Vanessa was previously married to Michael Kurer, a consultant orthopedic & shoulder surgeon. He proposed on their first date and she accepted. The two walked down the aisle in 1983 in a ceremony that featured 10 bridesmaids and a Bo-peep wedding dress complete with a voluminous tulle skirt covered in pink fabric roses. The union ended in divorce in 2000 after Kurer allegedly left Vanessa for another woman.

Vanessa has two children Allegra Kurer and Saskia Kurer from her previous marriage to Michael Kurer.

In 2020, Feltz spoke publically about her weight loss, explaining how she slimmed down so drastically and lost three stones in weight. During an interview with The Sun, she revealed that “spectacular athletic sex” had helped her to keep the weight off and also revealed that she “barely” drinks alcohol. She went on to have a gastric bypass where surgical staples create a small pouch at the top of the stomach, which is connected to the small intestine, thus bypassing the rest of the stomach meaning you eat less. She also had a gastric band fitted back in 2010 after years of struggling with yo-yo dieting. However, she had the slimming aid removed after suffering from gastroesophageal reflux which made her wake up feeling as if she was “drowning”

Feltz and her fiancé Ben Ofoedu live in London in a  £3.5million three-storey house – which was previously owned by multi-millionaire businessman Charles Saatchi.. The house has a unique Gothic look, with a pointed roof and arched window frames. There’s plenty of space at the front of the St John’s Wood property for car parking, and there’s a big garden at the back. The inside doorways are arches to fit in with the outside design of the house – meaning it’s all open plan with no fitted doors between the rooms. The living area is all cream – from the painted walls to the carpet and a huge L-shaped sofa, which doubles up as a bed. Likewise, the secondary living room is clean white, broken up with a gold feature fireplace and hanging gold-framed pictures on the wall.

Feltz currently presents an early morning radio show on BBC Radio 2 and the Breakfast Show on BBC Radio London and also regularly sits in for Sara Cox and for Jeremy Vine on BBC Radio 2. She presented the ITV daytime television chat show, Vanessa, made by Anglia Television and then moved to the BBC to host a similar show, The Vanessa Show, in 1998 in a reported £2.7 million deal.

She was also a presenter at the local radio station BBC London 94.9 where she presented a mid-afternoon phone-in show and it has continued to run since then at various times, from 2005 to 2015 at 09.00 to noon. Since 2016 it has been broadcast from 07.00 to 10.00 Monday to Friday. Also in 2001, Feltz was a contestant on the first series of Celebrity Big Brother. She has appeared on its spin-off shows Big Brother’s Big Mouth, Big Brother’s Little Brother and Big Brother’s Bit on the Side on numerous occasions.

In 2002, she made a cameo appearance in the comedy film Once Upon a Time in the Midlands and in May 2003, she was voted 93rd on the list of worst Britons in Channel 4’s poll of the 100 Worst Britons. She also made regular appearances on five’s The Wright Stuff, but then had to depart the show because the timing clashed with her new radio show. In 2004, she made an appearance in a sketch in the first episode of the second series of BBC comedy sketch show Little Britain, playing a spokeswoman for fictional slimming club Fat Fighters. Also in that year she appeared in the second series of reality TV show Celebrity Fit Club in a bid to lose weight.

Feltz has also appeared on three different episodes of The Weakest Link. In two episodes she made it to the final round but lost to Sue Perkins on one occasion and to Tony Slattery on the other. The third episode she appeared on was the Special 1,000 Celebratory episode to celebrate 1,000 episodes of The Weakest Link being made. She was the 6th one voted off. In 2010, Feltz and Ofoedu won their episode of the Virgin 1 show A Restaurant in our Living Room, preparing a dinner at their home for 25 people.

Vanessa returned to the Big Brother house on 3 September 2010 during Ultimate Big Brother, the last series to be broadcast on Channel 4. She was evicted from the house on 8 September, two days before the final. In 2011, she took over the BBC Radio 2 Early Breakfast Show on 17 January 2011 broadcasting from 05:00 until 06:30 each weekday. . She often covers Jeremy Vine’s news and current affairs show on Radio 2 when Vine is away.

Vanessa has authored several books including, What Are These Strawberries Doing on My Nipples? I Need Them for the Fruit Salad, Raw Voices: True Stories of Hardship and HopeThe M Word: Everything You Need to Know About the Menopause

She has an estimated net worth of $52 million.