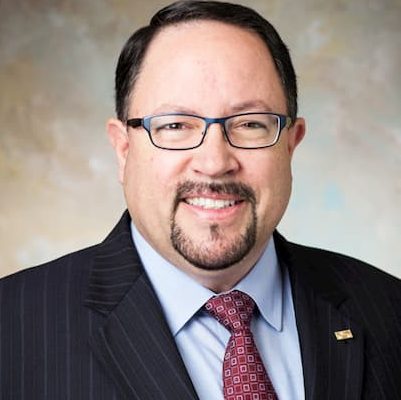 Robert Unanue is the President and CEO of Goya Foods, a family-owned company that produces and sells staple foods of the Hispanic culture. He is facing backlash for supporting president Trump which has led to the boycott of Goya products.

Robert is an American national.

He belongs to Latin-American ancestry.

Robert is the son of Anthony Unanue, although the name of his mother is unknown but she is Irish-American. His father Anthony was an engineer by training, he died in 1976, at the age of 48 of leukemia.

He has five siblings.

He is married to his college sweetheart Muriel Fitzpatrick.

Unanue is a father to two children.

Robert is the CEO and president of Goya Foods, a family-owned company that produces and sells staple foods of the Hispanic culture, since 2004.

Goya was started by Robert’s grandfather, Prudencio Unanue Ortiz who migrated to the U.S. from Spain. He started the company to give Spanish immigrants authentic ingredients. He initially sold Spanish condiments in New York until the Spanish Civil War cut off his supplies. He began importing “Goya” sardines from a Moroccan cannery. He bought the rights to the Goya name for $1 because it was easier to pronounce than his own name.

Robert’s cousin, Andy Unanue (the son of Joseph Unanue), was COO at Goya Foods before leaving the family business to start his own company. Four other cousins have a hand in Goya’s operations.

His father, Anthony exposed them to life outside Goya. For a brief stint, the family moved to Maryland where Anthony worked for the federal government. When they returned to New Jersey, however, Anthony started bringing 10-year-old Bob to Goya’s packing plant on Saturdays.

While studying accounting at Merrimack College, he took about a year off and bought and briefly ran a 1950s-style restaurant in New Jersey. In 1999 he was asked to run Goya, the Florida operation. He has worked in Goya’s facilities in Puerto Rico, California, Florida, and Spain.

On July 9, 2020 during a roundtable for Hispanic business and political leaders at whitehouse, Robert praised President Donald Trump and said the country was “blessed” to have Trump at the helm.

“We’re all truly blessed at the same time to have a leader like President Trump, who is a builder. We have an incredible builder. And we pray. We pray for our leadership, our president, and we pray for our country — that we will continue to prosper and to grow.”

Goya Foods CEO Robert Unanue: “We’re all truly blessed… to have a leader like President Trump who is a builder.” pic.twitter.com/2VdG4qAnpK

After he faced a lot of backlash he released a statement reiterating his his support for the president’s Hispanic Prosperity Initiative, which Trump established by executive order at the White House roundtable.

“Our country faces a time of historic challenge but we will meet that challenge together and continue to work towards greatness, focus on a strong recovery, and hold onto the hope for a healthier future for all.”

Trump has maintained a tenuous relationship with much of the Hispanic community since his first campaign speech for the presidency, in which he described Mexican immigrants as “rapists” and “criminals.”

On July 10, the hashtag #Goyaway was trending on social media

U do realize Latinos buy your products? The same people Trump has routinely shit on!

No apology from @GoyaFoods will be sufficient to erase today’s comments.

If GOYA cares about the Hispanic/Latinx community (AND REALLY WANTS TO APOLOGIZE) then they better start by sending food to asylum seekers at the border and feed EVERY SINGLE immigrant Trump has detained.

During an interview with Fox News on Friday, July 10, Unane said he was “not apologizing,” and called the boycott movement “suppression of speech.” He claimed there was a double standard in the reaction to his laudatory remarks about Trump, noting he accepted an invitation from Michelle Obama in 2012 to an event in Tampa, Florida, to promote the former first lady’s healthy-eating initiative.

“You’re allowed to talk good or talk praise to one president but you’re not — when I was called to be part of this commission to aid in economic and educational prosperity and you make a positive comment, all the sudden that’s not acceptable. If you’re called by the president of the United States, you’re going to say, ‘No I’m sorry, I’m busy, no thank you?’ I didn’t say that to the Obamas and I didn’t say that to President Trump.”