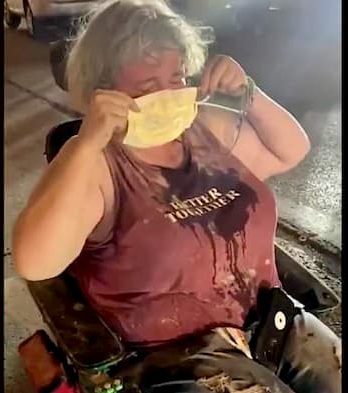 Who Is Jennifer at Target

Jennifer is a Minneapolis woman who tries to block looters from leaving a Target store in Minneapolis while wielding a knife and maneuvering a motorized wheelchair. The looting was happening as people were protesting against police brutality after the death of George Floyd.

Jennifer Tried to Stab the Looters

While trying to stop the looting she seems to hold a knife. The crows outside the Target store shouted that the woman had a knife, and footage showed her holding what appeared to be a sharp object. She was sprayed with a fire extinguisher, and a voice can be heard saying, “Jennifer, is that enough?” and “Jennifer, is there anything I can do for you, please?”

She was attacked by the protestors

A video shows Jennifer getting violently beaten on the head by a looter at Target.

“They attacked from the front and back. They punched me in the mouth, my head… I got punched in the head several times. I got grabbed from behind… They stole my keys. They stole everything they could off of me. I got mase in the face and covered with fire extinguisher stuff. I’ve already seen the EMT’s and they told me to go home.”

Jennifer acting like she just fought in the Battle of Gettysburg 😂😂😂pic.twitter.com/mrjoJd32B8

Jennifer doesn’t seem to be immobile as a snap chat video shared on Twitter shows her getting up from her wheelchair and walking around.

This JENNIFER IS THAT ENOUGH lady grabbed a knife, hopped on an electric wheelchair, and drove prepared to lay her life down for her local target