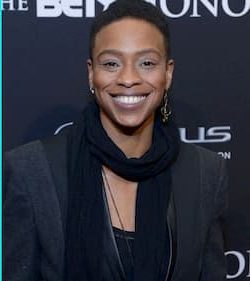 Jessica Betts is an American R&B singer-songwriter who at the age of 23 in 2005 became the winner of Road to Stardom, a competition show hosted by Missy Elliot. She is the wife of Niecy Nash after they got married on August 31, 2020.

Jessica is an R&B singer-songwriter. She began her career in music in 2000 when she got a record deal at Restless Record. She released her debut album, ‘You Can’t Resist’ before parting ways with the label shortly after. She has also appeared on soundtracks for several major motion picture films including Martin Lawrence’s ‘Big Mama House, Sarah Michelle Gellar’s ‘Simply Irresistible’, and Ja Rule’s ‘Turn Up’.

According to IMDB, her songs are influenced by the classic works of Aretha Franklin, Sam Cooke, Whitney Houston, Lauryn Hill, Kim Burrell, Tracy Chapman among others.

In 2005, at the age of 23, she won the Road to Stardom, a competition show hosted by Missy Elliot. After winning she released the album, Jessie Pearl internationally.

In June 2014 she released her #LLcoolJess mix EP. She was inducted into the showcase of BET Music Matters artists in 2011. In 2013 she opened the Mid-Atlantic ‘Rebellious Soul’ tour and in February 2014 she closed the BET Honors pre-show.

In 2018 Betts appeared on Claws playing the role of Nadege. One of her original songs, “Catch Me” was sang by Nash on the set of ‘Claws’. In a feat of foreshadowing, Nash was wearing a wedding dress at the time the video was recorded. “This woman of God, I’m honored and blessed in her presence. She’s anointed and appointed,” Betts wrote in her caption.

I want to give a special shout to @niecynash1 👽 This woman of God, I’m honored and blessed in her presence. She’s anointed and appointed. She singin my tune, 🤣 #CatchMe Link in bio 👽 Thanks Cora! This is for YOU❤️🙌🏾 #ClawsTNT #bettsofbothworlds #seasonfinale #waitforit😂

On August 31, 2020 Jessica and Niecy Nash announced that they had gotten married.

The news about their wedding came as a surprise as the couple had not made their relationship public and Nash had not come out publicly.

Nash was previously married to Don Nash from 1994 to 2007 and they have three children together. She later got married to Jay Tucker in 2011 and in 2019, after eight years of marriage, they announced they were getting a divorce.

There is no timeline on when Nash and Bett began dating or how they met but the couple had previously posted each other on their social media. In 2018 while on set of ‘Claws’ Nash wrote about Betts on her Instagram stories.

Introducing “NADEGE” on the Set of #clawsTNT – #Setlife #GodIsGood #bettsofbothworlds 👽 make sure y’all check this show out. It’s Gangsta👽

Betts net worth is unknown.

Jessica Betts is not the daughter of Dickey Betts, a member of the Allman Brothers Band. Dickey has a daughter named Jessica Betts but she is not the Jessica in question. They just share similar names.