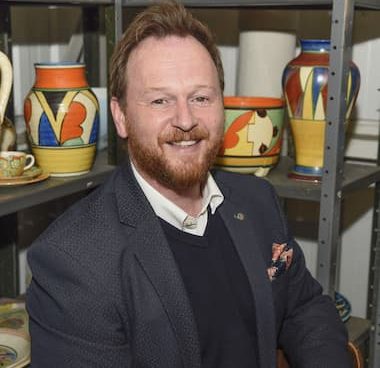 Will Farmer is a fine art and antique auctioneer, valuer writer and a television personality who appears as a specialist on BBC’s Antiques Roadshow.  He specializes on 20th Century ceramics and glass

He stands at a height of  5 feet 9 inches tall.

Will has not revealed the name of his mother but he has since passed away.  In March 2021 during an episode of ‘Antiques Roadshow,’ he remembered his late mother as he brought a series of treasures that belonged to his family. He brought some glasswear, as well as a distinct piece of artwork.

While discussing how his mum came to own the painting, he explained: ‘There we have a painting I think is just wonderful. This belonged to mum, I remember her buying it, I was only 14 or 15 at the time I think, we were in Newark at the big antique fair there and we went up and down the aisle so many times and she laboured and laboured whether she should buy it and at the time it was £400 and we’re talking mid to late 80s and I just remember her saying, ‘Oh Leslie, just do it’ and she brought it and it hung by her bed from there on in. She taught me in this whole thing there’ll always be another way to earn money, but if you love it and it stirs something in your soul and you enjoy it, then go for it.”

Farmer has not revealed his marital status; it is not clear whether he is married or even dating.

He has not revealed his sexual orientation.

Will is an antique expert whose love for antiques stems from his childhood. He went to his first auction at the tender age of six months alongside his mother.

His childhood was spent “spent scouring auctions and antiques shops around Derbyshire, Nottinghamshire and Yorkshire with my mum and gran. By the age 6 I had started collecting myself with an interest in silver. Back then I was given 50p or if I was really good a green crisp £1-00 note to spend. The first thing I collected was small silver backed prayer books called ‘cherub silver’ which was based on the cherub head painting by Sir Joshua Reynolds. From an early age I became a keen negotiator securing a lower price from the many dealers who got to know me and my mum as we travelled around. By the age of 8 or 9 years old I had moved on to Steiff toys and bears but the thing that changed my whole future was a chance discovery at my late Grandmas house.”

He revealed that his love affair with Art Deco, design and ceramics was sparked by an Art Deco Shelley Art Deco coffee service he found at his grandmother’s house which was his grandmas wedding gift which she gifted him on Christmas.

“I discovered, tucked away at the back of a cupboard, the most wonderful Art Deco Shelley Art Deco coffee service. Filled with excitement I ran to tell my Gran what I’d found, of course she knew it was there and what it was! I asked if I could have it however she said ‘No, that was my wedding present!’. That Christmas it was wrapped up and given to me with a little note telling me to look after it and its something I still treasure today. That gift sparked what has now been a love affair with Art Deco, design and ceramics for over 35 years. My discovery of that Shelley set led to my passion for the work of Clarice Cliff which has become the foundation for my career and is always my touch stone when it comes back to what I love most.”

Will is a co-founder of Fieldings Auctioneers Limited alongside Nick Davies. He serves as the director and 20th Century Design and Glass Specialist. He previously serves as Head of Fine Art & Antiques at the Birmingham auction house Weller & Dufty.

Farmer is a specialist on BBC’S Antiques Roadshow. He has a passion for 20th Century ceramics and glass. He joined the Roadshow in 2004. His memorable find is a beautiful Fornasetti desk in Jersey.

Will Farmer Net worth