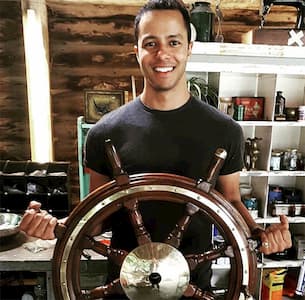 Will Kirk (William Kirk) is an antique furniture restorer appearing on BBC reality show, The Repair Show. He is the founder and owner of William Kirk Restoration workshop, where they specialize in french polishing, wood carving and gilding to general cabinet making.

Kirk studied Graphic Design at the University of the Arts before graduating with a BA in Antique Furniture Restoration and Conservation from London Metropolitan University.

Will has not revealed much information about his family but he said that he was inspired to join woodwork by his grandfather who worked in his workshop.

Kirk is engaged although he has not revealed the name of his fiance. During an interview with Lorraine, he revealed that their wedding was set in August but they had to postpone due to coronavirus.

“I’ve been putting up lots of shelves, the lovely fiancé has been keeping me very busy! We were supposed to be getting married in August and unfortunately that didn’t happen, so we’re going to get married next year. Yes, I’ve been kept busy!”

He is not married yet but he is engaged set to get married in 2021.

Will furniture restorer and conservator with a unique talent for staining and French polishing. He was inspired by his grandfather who worked in a workshop. He traveled to Italy with the Worshipful Company of Painters and Stainers, to represent the UK at the annual ‘Salon Decorative Arts Fair’, as well as working for various workshops and dealers in and around London.

In 2012 he set his workshop, William Kirk Restoration in London. According to the workshop’s website, they specialize in french polishing, wood carving and gilding to general cabinet making.

Will Kirk The Repair Shop

Kirk is a regular cast member of the BBC reality show, The Repair Show where he serves as an antique furniture restorer. He features alongside host Jay Blades, Steve Fletcher, Suzie Fletcher, Lucia Scalia and Dominic Chinea.

Catch me on ITV’s @lorraine tomorrow morning when I will be chatting all things @therepairshop.tv with the lovely @lorrainekellysmith, with a sneak peek at what’s coming up, as well as who inspired me growing up, who I want to inspire and why apprenticeships are so important… and all about our little community under the thatched roof who have over 500 years’ of expertise collectively! The new series of The Repair Shop is airing weekdays at 4.30pm on @bbcone #therepairshop

Is Will Kirk Jay Blades Son

Wil is not the son of Jay Blades, the two are just co-workers on The Repair Shop. Jay is the host of the show while Will is one of the experts in the show.

One of the many things I love about filming in the British countryside is being surrounded by nature. As a huge fan of hedgehogs, I decided to build a hedgehog house. Hedgehogs hibernate between November and mid March, so in preparation I thought I’d make a snug space for the little locals. If you have any outdoor space and would like some tips on how you can help the gardener’s friends, please follow the link below 🦔🍂🌄 https://www.rspca.org.uk/adviceandwelfare/wildlife/inthewild/gardenhedgehogs #therepairshop #thewealdanddownlandmuseum #rspca #hedgehog #britishcountryside