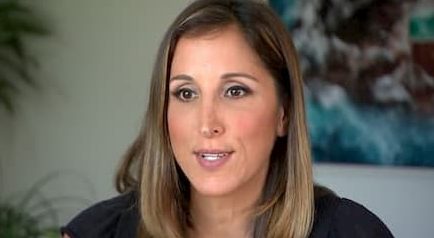 Yasmin Vossoughian is an American media personality serving as the host of MSNBC Live on the weekends, from 3 p.m. ET to 5 p.m. ET. She previously hosted Morning Joe: First Look.

Yasmin stands at a height of 5 feet 7 inches tall.

She attended Cornwall Central High School before transferring to Northfield Mount Hermon School, Massachusetts. She later joined Occidental College in Los Angeles graduating with a Bachelor of Arts degree in economics and history.

Vossoughian belongs to the Iranian ethnicity.

She is the daughter of Dr. Ahad and Shamsi Vossoughian

Yasmin is married to Whittaker Lindsay Clifford since June 2016. He is a businessman who manages his family business called Clifford Associates Inc.

Yasmin joined MSNBC in 2017. She hosts MSNBC Live on the weekends, from 3 p.m. ET to 5 p.m. ET on MSNBC. She previously hosted Morning Joe: First Look which was scraped and replaced with Way Too Early, which was formerly hosted by TODAY Show anchor, Willie Geist.

Vossoughian joined HLN in May 2014 as a correspondent where she covered a variety of beats including entertainment and breaking news. Prior to joining HLN, she was a host and producer for a live news and entertainment program at AOL.

She previously served as a reporter for the local New York City cable news channel NY1. Her accomplishments include on-site coverage of Hurricane Sandy’s devastation and as one of the first reporting teams to broadcast from the severely hit borough of Staten Island.

She began her career at E! Entertainment TV in New York City. She worked for “The Howard Stern Show” for a bit, and then picked up a second gig as a production assistant for the Style Network. In 2005 she joined Al Gore’s newly launched Current TV as a correspondent. In 2006 she received a Cine Golden Eagle Award for her work there.

In 2006 she joined Gallup World Poll based in Washington, D.C. as a world news correspondent. As their online liaison, she traveled to Israel and Africa and the Middle East and put stories to these numbers. She interviewed Fatah youth leaders about the Israeli-Palestinian conflict, young West Africans with HIV/AIDS and malaria, and experts in water filtration and environmental protection in Singapore.

She has no tattoo but has a big purple birthmark on her entire left leg. She wrote an article about the birthmark and said she has learnt to accept herself.

“For the last 40 years, I’ve been learning to accept myself, appreciate what I have and honor what makes me different. But some days are harder than others, especially now that summer is almost here and we start to shed clothing.”

She added that as a news anchor she fells the idea of getting scrutinized over her birthmark often felt too much and she chose to cover up with pants and tights.

“The idea of adding scrutiny over my birthmark has often felt too much. Imagine turning your TV on tomorrow morning and seeing me sitting there with a dress and a purple leg. I can’t help but wonder: ‘What would you think? What would the executives that pay my salary think? Would it distract even more from the incredibly important news we’re trying to deliver? Would your opinion of me change? Would you think I was ugly or pretty? Would you wonder what exactly happened to me?’

Those are the thoughts that run through my head everyday when I get dressed for work. Instead of dealing with all those unknowns, I have previously chosen to cover up with pants, tights, whatever. But as the days get longer and warmer, those decisions get harder. And guess what? It hurts.”

Vossoughian doesn’t have bell’s palsy, also known as acute peripheral facial palsy. It is a condition that causes a temporary weakness or paralysis of the muscles in the face. It can occur when the nerve that controls the facial muscles becomes inflamed, swollen, or compressed. The condition causes one side of the face to droop or become stiff.